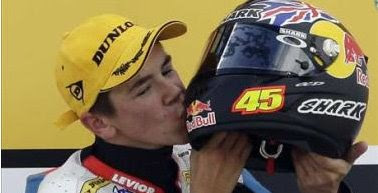 Congratulations to Scott Redding, who's just won the 125cc class at the British MotoGP meeting at Donnington Park. This gladiator on a motorbike is only 15 years old, and even though he can wrestle a powerful machine around a demanding race track, battling with fierce opposition, he's still too young to drink the celebratory champagne on the podium!

In other news, I'm having a very lazy day here. Just doing a bit of web design work and spending far to omuch time pootling around on Facebook! Alas, it's a bit of an obsession at the moment.
Posted by Portia Da Costa at 1:44 pm