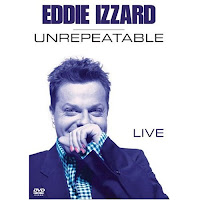 Having temporarily given up on Snakes on a Plane, because it's stupid and predictable and not even Samuel L. can save it, I've switched to watching some Eddie Izzard comedy tapes instead. I got a whole batch of them from a charity shop a while ago, and I'd forgotten all about them until my critique partner mentioned Eddie, and I remembered I'd got them.

And Eddie is indeed groovy [one of his favourite words...] So funny, so wacko, so spot on observationally too in a twisted sort of way. And for a slightly chunky lad, he's pretty too... and of course, he appeals to me especially as he's a bit of drag queen too. Not in the Priscilla way... but in a sort of glammed up, but wearable sort of style. If that makes sense? He seems to like to mix and match women's and men's clothes, which I think is really creative, so good luck to him!

In other groovy news...

Have been pushing ahead on Buddies Don't Bite, and though I'm in a slightly puddingy bit of the story at the moment, I'm keeping it moving, and I think I'll be able to tidy up the stodge in the editing. We're getting pretty close to the moment of truth, when it dawns on Teresa that Zack really is the thing she's been telling herself is silly and doesn't exist... :)

Have also had a bit of publishing type news... can't really trumpet about it just yet, but things are looking good on the getting into print front for one of my current projects. I never dare count the sale chickens until I've signed on the dotted line, but there's strong hope on this one...

So watch this space carefully!!!