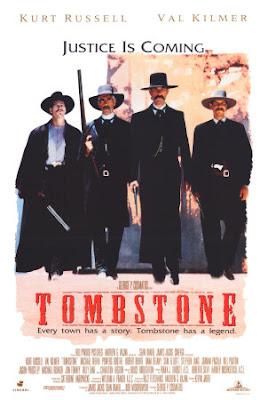 Last night, I watched one of my favourite films for the second time in a week... and the second time was just as fresh as the first. I love TOMBSTONE! It's not a new movie, but clearly, it's one I never tire of... even though I know the story back to front by now. Well, the story as portrayed in the film... I'm sure the real story of the Earps v. the Cowboys was considerably different and more complex. 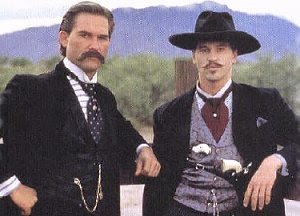 Apart from the obvious excitement and tension of the story, and the cracking gunplay of the infamous OK Corral and elsewhere, it's just a film that looks so good. Hot damn, those Earps are so stylish! They must have been the sharpest dressed gunslingers in the whole West. I love the frock coats, the whole severe collar, necktie and posh waistcoat thing, the cool hats... and oh, Wyatt's long, black duster coat that he dons when he means heavy lawman business! I would love one of those myself... I'm not so sure if I fancy men with such bushy moustaches... but then, they were the fashion at the time, and were obviously de rigeur for any self respecting sherriff or deputy. 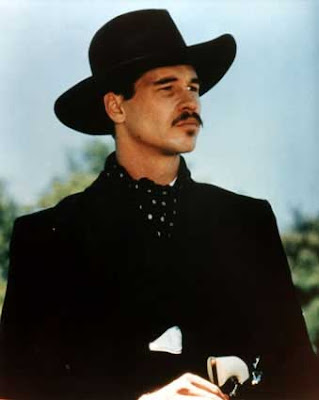 Kurt Russell is fab as Wyatt Earp, sort of generally noble but also conflicted... but the real star, I think everybody will admit, is Val Kilmer's Doc Holliday... the prince of the morbidly droll one liners. Hard to believe that a guy can be sexy when he's white as a sheet and sweaty all the time, and always on the point of coughing blood, but he manages it supremely and he's certainly my 'huckleberry'. Also kudos to Michael Biehn as a coldly deranged, Latin quoting Johnny Ringo.

I'm not sure whether Tombstone ranks as a classic, traditional western or as a revisionist [not that I'm quite sure what that means]... but I'd say it's got a least some of the latter's qualities, because nobody's portrayed, really, in simple black and white terms of good and bad... The Earps weren't angels by any means. They were ruthless killers themselves, who happened to be on the side of the law, some of the time. Brilliant examples of good 'bad boys' or ambiguous 'good guys'... gotta love 'em! 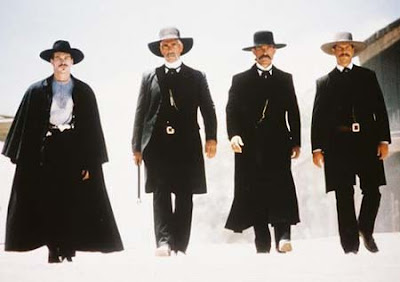 
Don't forget Portia's Promos - new stuff being added all the time!
Posted by Portia Da Costa at 8:58 am 2 comments: