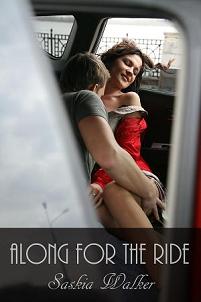 Soon after her arrival in London, Georgina Montgomery finds herself modeling privately for one of her art college tutors, the Austrian artist Calvin Rolf. They become lovers and when Cal introduces her to his Fleet Street photographer sidekick, Jason Sutherland, a steamy ménage à trois affair follows. Georgie discovers that being involved with two gorgeous men is a heady intoxicant, and she quickly casts all her inhibitions aside. She’s in her element, but their idyll of sexual adventuring in London is interrupted because a paparazzi scandal threatens to erupt around them.

Jason has taken intimate photos of an old flame, Chloe Mac, now a pop star and media darling. His cousin is after the images to sell to the highest bidder, and Jason has to get to the photos in Scotland before his cousin does. Cal and Jason decide to hit the road, and Georgie comes along for the ride.

But the paparazzi hunt results in Georgie’s kidnap, and danger ups the emotional stakes for everybody involved. Georgie has to put her new found sexual power and confidence to good use, and territorial claims of the heart are about to be made.

You can find out more about this deliciously hot novel here, and enjoy a sizzling excerpt: