from Russia with love

Imagine my surprise when I opened a parcel this morning and found copies of one of my books in *Russian*! It seems that my 2004 title DESIGNED FOR SIN, published by X Libris under the pen name DOROTHY STARR has been translated into Russian and issued as a hardback... How cool is that? I've often exchanged emails with my writing buddy and web client Elizabeth Chadwick about the idiosyncrasies of her Russian book covers, but this is the first time I've had some of my own to marvel over... 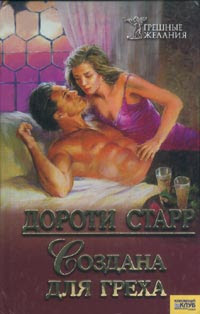 Now those of you who read my books and know where my inspirations come from will know that DESIGNED FOR SIN is my Spike from BtVS book... but the Russian cover artist seems to have completely ignored my physical description of the hero and made him dark haired! Unless of course, he's been given a retouch in the translation... But hey, I'm not worried in the slightest because it's so ineffably splendid and nifty to have a book translated into Russian at all! I think this is my first ever Soviet title... and I'm chuffed to bits!

Imagine my further surprise, when, while I was flicking through the book and showing it to himself [who was dead impressed!], I discovered that it's *illustrated*!!! Some of the line drawings leave a little to be desired, but there's an enthusiastic quality about them that's a lot of fun, and they do fairly faithfully represent scenes from the book. I've picked out one below that does indeed seem to suggest the correct colour for the hero's blond hair...