Some rather nice news! 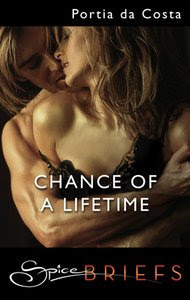 Not actually about CHANCE OF A LIFETIME, although that still seems to be selling very nicely... No, the news is I've had two more ideas for SPICE BRIEFS accepted! :)

The first, ANOTHER CHANCE, is linked to Chance of a Lifetime, and is about Maud, an archivist who comes to Blaystock Manor to sort out the Marquis's rather valuable collection of documents and manuscripts. Expecting a quiet gig amongst the dusty papers, she doesn't bargain for becoming involved with William Graves, the hunky loner estate steward.

A GENTLEWOMAN'S RAVISHMENT is another linked story, this time to A Gentlewoman's Predicament. So, more naughty goings on in discreet Victorian society, and a married woman who dreams of been swept away by a sexy brigand.

No idea when these will appear, as I've only written about two thirds of Another Chance yet, but I would guess it'll probably be 2010 before they appear. But you never know... ;)