TEMPTED BY TWO and a giveaway! 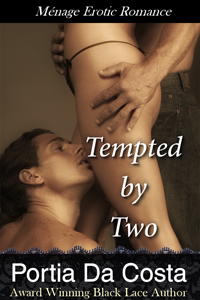 This is a brand new, never before published novella and it's been huge fun to write. I had such a great time writing my first menage novella, POWER OF THREE, and I was keen to do another threesome story. I also wanted to write something set in the sort of  traditional village setting that I love from watching my favourite Miss Marple stories on the telly. It's a nod to the  famous and very clever detecting old lady that the village Katie visits is called Little Marplethorpe... I also indulged myself hugely with the 'hero templates' I used. My two big crushes at the moment are Benedict Cumberbatch as Sherlock, and Simon Baker as The Mentalist, Patrick Jane, so these two yummy actors 'play' Marcus Dane and Owen Foster respectively.

When executive woman Katie Warren arrives in the picturesque village of Little Marplethorpe for a country holiday, to reassess her life and her future, she doesn't bargain on ending up in a hot three way love affair with a man she's admired from afar... and his gorgeously handsome male partner.

TEMPTED BY TWO is a fairly chunky novella of 33,600 words, and if you haven't yet tried POWER OF THREE, you'll find a 600 word taster of that included too.

There's a hot excerpt of TEMPTED BY TWO here, and you can buy it from All Romance eBooks, Smashwords, Amazon.com and Amazon.co.uk with more outlets to follow.

Finally, to celebrate the publication of TEMPTED BY TWO, I'm offering a free copy of the book to each of three randomly chosen commenters on this post. I'll draw the three lucky names a week from today on Sunday, 3rd June at 12 noon GMT.