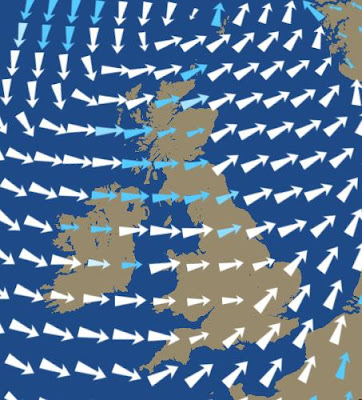 Just look at all this mad wind over the British Isles! It's crazy out there! I've just been up to little town for an essential prescription, and I nearly got wafted off my feet... and I'm no sylph, I can tell you. When I got back I felt as if I'd been put through an industrial mincer and an hour later I'm only just getting over the shock of it.

Am really close to the end of In Too Deep now. Just a couple of scenes left to write. Strangely though, I'm still not in 'race for the end' mode, the way I usually am at this stage. I'm almost reluctant to push on... not because I don't want to leave my characters, but because this has been quite a tough book to write and I'm scared of it somehow. And I know there will be tons of editing, changing and layering to do. I think the lesson to be learned is to stop pantsing as much, and do more planning and working out beforehand. Then I wouldn't be changing so much on the fly and having to go back and engineer what's already been written in order for it to be consistent. I freely admit that I dove into this book without a clear idea of what it was... and that's just stupid!!!


Don't forget Portia's Promos - new stuff being added all the time!
Posted by Portia Da Costa at 11:29 am 2 comments: