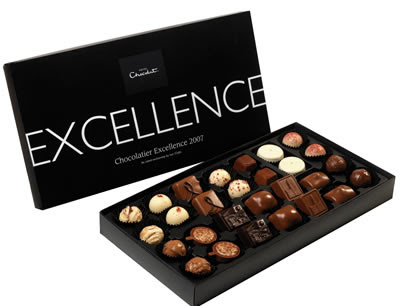 A short while ago I was searching for something in my office [see post below to get some idea of the horror of that concept!] when the phone rang... and it was a telesalesperson. Now, these unfortunates usually get short shrift, and a v. terse dismissal from yours truly, but this lad said the magic words... Hotel Chocolat!!!!

Things immediately warmed up. I'm a member of HC's glorious Chocolate Tasting Club, and naughty, tempting devil of a telesalesboy was ringing to lure me with the prospect of their latest Excellence collection. Now... I've been looking at finances, and my prospects, and I'd sort of decided that this year I'd be v. good and not overindulge myself... but it was hopeless... and now I have the above yummy scrummy treat to look forward to in a week or two's time...

I'll tell you all about them... in between sighs of delight...
Posted by Portia Da Costa at 2:46 pm 4 comments:

Email ThisBlogThis!Share to TwitterShare to FacebookShare to Pinterest
Labels: chocolate

in one of my grrrrr moods...

Yes, I'm feeling particularly curmudgeonly at the moment. In that frame of mind where I'm just feeling so out of sorts and out of step that I'd just love to go on some sort of rampage, telling folk just what I think of them, and beating some sense into them with a large frying pan! I'd love to commit some wild and destructive act, like throwing a lot of stuff around the house and screaming my head off! I know it won't do any good at all, and the causes of my acts of mayhem will not be affected by them... but I'd still like to do it. Just to let off steam...

Maybe I should get on my exercise cycle and pedal like fury? Exert some energy? I've already done my half hour, and I'll probably get saddle sore... but it might be one way to open the safety valve. I hate the way this anger just screws me up all the time... and it ****s up my writing too. It disempowers me... but I'm so prone to it. I always seem to be a bit cross about something... If it's not the stupid government, or the bad, bad people in the world, or imbeciles on the telly, it's the publishing scene and the stuff that I happen across in it...

I think I'm probably more suited to being a boxer or a lumberjack than a writer...

--
Telly: new CSI
Chocolate: cadburys biccies
Mood: see above
Writing: not yet
Reading: nothing yet
RSI: a bit sore
Posted by Portia Da Costa at 10:57 am 4 comments: