my Bank Holiday in Spain and France... 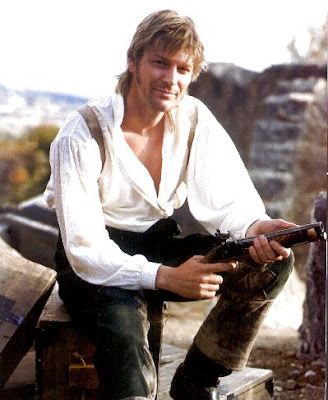 with the rough but delicious Major Richard Sharpe! UK TV History has a Sharpe marathon over the long Bank Holiday weekend, and despite my intentions to work at writing and catching up, I've got drawn into Sharpey's Napoleonic War adventures. Gosh, he's so fit, it's hard not to... Odd to think that but for a footballing injury, Sharpe might have had a different face. Instead of the splendid Sean Bean, it might have been another of my faves, Paul McGann, who I was spending the weekend with...

I must say there's something particularly hot about a handsome dashing soldier... My Nathaniel in OBJECT OF DESIRE is a super fit ex serviceman turned academic and in EYES OF DESIRE, Guy is an elite special forces operative on leave. Yum yum!!!