Diamonds in the Rough... out everywhere! 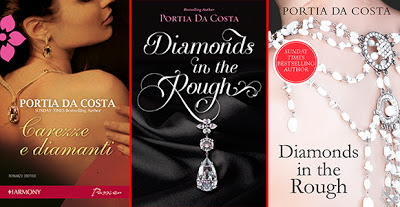 Even though friends report seeing DIAMONDS IN THE ROUGH in UK shops like W H Smith, the print version seems tricky to get hold of online thus far, although the Mills and Boon web site has copies available. There are tons of places to get a digital version though.

Anyway... DIAMONDS IN THE ROUGH is here, and it's the second full length novel in my Victorian set Ladies' Sewing Circle series, and pretty much my big self indulgent Sherlock Holmes fantasy. The handsome hero Wilson Ruffington is a 'consulting scientist' rather than a consulting detective, but he shares many of Sherlock Holmes' eccentricities, although with one significant exception. Whereas The Great Detective was canonically portrayed as asexual, Wilson is very sexual indeed! Especially when it comes to his dealings with his distant cousin Adela, who he can't seem to keep his elegant scientific hands off.

Feisty, independent Adela Ruffington is similarly drawn to Wilson. She finds him physically irresistible, even though otherwise, there's nothing but antipathy between them. Wilson can be self absorbed and thoughtless, his mind full of his science, and that means he doesn't always employ much in the way of tact and delicacy, even though his heart is very much in the right place.

These two fiery and pugnacious lovers have a lot of issues to contend with. Due to a complicated will, Wilson inherits all of Adela's grandfather's enormous wealth, leaving her, and her mother and her sisters as good as penniless... and that's not all of it. Wilson is also the lover who took her virginity, back when they were both young and infatuated with each other, and adding injury to insult, he then he caused her to break her nose, when she fled from him after an almighty argument!

So, many obstacles stand between these two. It almost seems impossible for them ever to get along as friends, never mind as sweethearts... and yet, somehow, they're drawn together again, to face their own demons, and as a team, a couple, and even as husband and wife, they join forces to banish the problems of other people that they both care about.

For a flavour of their relationship, read an excerpt here:

And if that whets your appetite, you can purchase Diamonds in the Rough from one of these outlets:


Here it is on the shelves of W H Smith, piccie courtesy of my author buddy Saskia Walker! 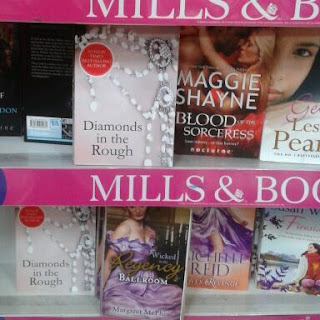 Posted by Portia Da Costa at 1:49 pm No comments: