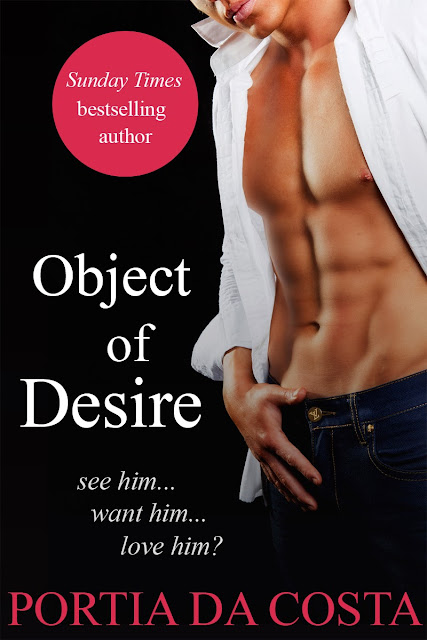 Here's my latest release - a long short story about neighbours to lovers, called OBJECT OF DESIRE.

Sylvia is totally in lust with her gorgeous neighbour Dr Nathaniel Gowen, a distinguished military historian who just happens to be a hunk with a killer body. She's been watching him exercise out in the communal garden for weeks, but somehow just can't make the leap from saying hello to the handsome academic to inviting him into her flat, her bed... and her life. Instinct tells her he's a good guy as well as desperately desirable.

OBJECT OF DESIRE was previously published by Total-e-Bound, and while the text remains substantially the same, I think we can all agree on the fact that this new cover is stunning!!! What a body, eh? Clearly Doctor Gowen applies him just as vigorously to his fitness regime as he does to his scholarly pursuits.

Doctor Nathaniel Gowen is a hunk, and when he puts his godlike body through a series of graceful Tai Chi moves outside in their communal garden, Sylvia Bradford can't help but desire him. He's everything she's ever wanted in a man.

There's just one problem though. She's never spoken to him beyond saying "hello" and she's having difficulty coming up with an opening gambit.

But while Sylvia's busy working out how to make the first move, and get to know the gorgeous academic, Doctor Gowen himself comes knocking at her door. Does he really want to borrow a cup of sugar… or is it something quite different, and a lot hotter, that he's after?

You can find an excerpt of OBJECT OF DESIRE here:

It's available to buy from Amazon.co.uk and Amazon.com with other outlets to follow very soon.

UPDATE - now available from All Romance Ebooks too
Posted by Portia Da Costa at 1:46 pm 1 comment: