The Film that started It All... 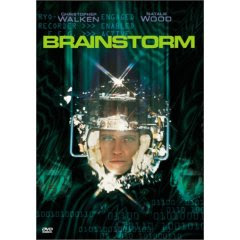 IMDb
Well, it didn't actually start everything to do with my writing career... That's down to a certain pop video that I loved at the time, but would never own up to being inspired by now...

But my first ever published novel, Adventures in the Pleasurezone owes a lot to the magnificent 1983 sci-fi masterpiece BRAINSTORM. Basically, it's a story about the development of a virtual reality technology that can record a person's experiences and emotions in order that they can be played back, and 'lived' again by another person. It sounds a techie sort of film, and in some ways it is, but it's also a powerfully emotional movie that explores issues of spirituality and consciousness and the way visionary scientists can have their magnificent breakthroughs exploited and ****ed over by vested interests, the military and The Man in general. It also has a very sweet and poignant love story at the heart of it, that's made even more touching because the actress who's a part of it, the very fine Natalie Wood, died just before the film was completed. It also stars one of my all time favourite actors, Christopher Walken, who looks so young in this that he's almost angelic. In fact he's called 'angel' at one stage in the proceedings. If you ever get a chance to see this movie on the telly or on DVD, give it a whirl and I think you'll be pleasantly surprised.

VR is a theme I've sort of returned to in TechnoGothic too, which is why I've been revisiting Brainstorm. My Alexander Graves is a sort of darkly dramatic, damaged, millionaire ex playboy version of Dr Brace... A brilliant, glamorous polymath who now hides himself away, obsessing over arcane computer code and esoteric electronics and experiencing the world via his own exotic creation...