These last few days I've been experiencing a rather weird phenomenon in my writing method.

Basically, I've felt like crap all day, and done virtually nothing productive... and then around 5pm in the afternoon, I've started writing or editing. I think it's a case of desperation setting in, more than anything. The horror and disgust with myself for wasting yet another day just drives me into trying to write something, if only a teeny tad.

Today I've been mainly polishing my first chapter of Ill Met By Moonlight [working title of my paranormal thingoid] and adding one or two more refinements/quirks to Robin's personality and paraphysical characteristics. I've also begun a bit that's told from Lois's POV too, trying to introduce her and give the readers a sense of what kind of woman she is. In the original version scrap, she was a bit 'hard', but she's coming across as softer and more sympathetic - I hope - in this new take on the story. She's still quite sparky though, but in a gentler and more wry way. 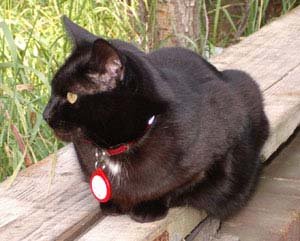 Non-Working Monkey can't be doing with people who put photos of their pets all over the place... so here's a cute piccie of Mulder! :)
Posted by Portia Da Costa at 2:48 pm 2 comments: