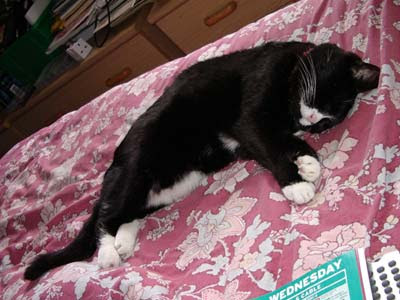 Here's Kuffer again, having a nice kip. He's on good form today, happy and cheerful and having eaten plenty of breakfast. No gurgly tummy either. I'm feeling much more optimistic about his prospects today, hoping that the blood test pinpoints the thyroid probs, and a suitable treatment can quickly begin.

Me, I feel terrible! I had a gruesomely broken night's sleep! Not worrying about Kuffer, really, but with my mind churning and turning about writing. Last night, aware that I've got the first draft of Buddies done, and both my agent and my editor are asking for new ideas, I decided I had to start thinking of some... A bloody sight easier said than done! Idea finding [and plotting] are my hugest problems, and last night was no exception. I lay awake for an age, turning bits and pieces over in my mind, and nothing but nothing transpired. Everything was either :
I couldn't pull anything together, and none of the vague bits were even worth writing down they were so poor. But, my mind continued to churn... and I kept waking up, almost every hour, with it still fruitlessly churning. I eventually fell asleep and ended up dreaming that I was managing a large, British country estate for absentee owner, Kevin Costner! And everything was in uproar because he was finally coming to visit... Go figure! He turned up and seemed quite friendly, then the dream morphed into a kind of posing contest between two rival drag queens, one of whom might have been Bernadette from Priscilla Queen of the Desert. Then I woke up...

None of the above was in the slightest bit useful for a novel idea, but when I was in the bathroom - as ever - some more useful fragments began to coalesce... it's still bitty, but some sort of rudimentary story idea is germinating, I think. Although it's still pretty daft, and it'll probably come to nothing... I also had one or two possible extra plotty bit ideas for an existing story. Although that too, is very vague and very slight, as yet...

Gosh, I don't half wish I was one of these writers I keep encountering on boards and lists who say they have a constant stream of ideas for books pouring into their heads!!! So many they can't write them all... Maybe I should offer to buy some of these ideas from author friends who have an embarrassment of idea riches???