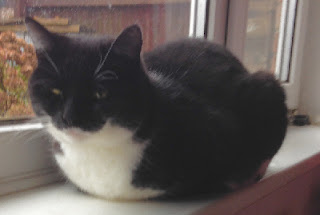 Our lad Mork is a bit under the weather at the moment. It's a combo of a recurring cough, caused by a viral thing he caught from his mum, originally, and a sore tooth that the vet discovered on examining him. He's had a jab for the cough, and when that settles down he'll be back to the vet's next week, for a dental. He's not too bad in himself, just a bit under par and not quite his usual wacky self.

Last night, I couldn't sleep very well, because I was concerned about him, so I fell to thinking quite a bit about The Boss's Secret. I think I've figured out what at least one of his secrets might be, but in many ways, he's a man of mystery, so he might have a few! I've also realised that the 'template' I had for him wasn't working, so I've switched to a new one. One of the things about Lawrence is that he's an older man. I seem to quite like writing about those, for instance, John Smith in The Accidental Trilogy was 20 years older than his lover, Lizzie. The age dynamic is fairly similar in 'Boss', although unlike John, Lawrence has prematurely white hair. And it's not quite as easy to find 'templates' for that. But as luck would have it, I've happened upon another hunk who has at least some white hair, and picturing Lawrence has him is increasing my enthusiasm for the story!

I won't say who the template is, because he's a rather unlikely one, and it's only in some photos and clips that he fits the bill. ;)

Posted by Portia Da Costa at 11:03 am No comments: