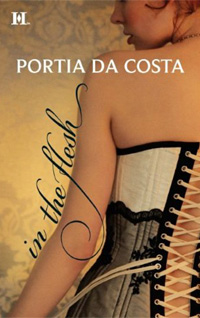 Here's my first full length historical romance novel - IN THE FLESH. It's had a weird road to publishing... it was going to be an erotica/erotic romance title, for Harlequin Spice, but when that line was closed, the book was moved over to the HQN line, and now it's listed as historical romance. For anyone that wonders, though, it's still the *same* book and it's just as hot! Luckily, it was always a traditional romantic love story too, with a journey towards a happily ever after ending, so it fit right into it's new home very nicely... despite an inordinate amount of bonking and other sexual shenanigans between it's stunningly beautiful covers. :)

This is what it's all about ie. the blurb:

"Society already believes she's a scarlet woman... why not become one?"

Posing nude to please her now ex-fiancé perhaps wasn't the most prudent idea Beatrice Weatherly has ever had. With the photographs scrutinized up and down society and her brother running them into debt, Beatrice's hopes of ever making a respectable marriage are dashed.

After one glance at Beatrice's infamous racy cabinet cards, wealthy, powerful Edmund Ellsworth Ritchie is soon obsessed with Beatrice's beautiful face and body. His indecent proposal--one month of hedonistic servitude in exchange for enough money to pay her brother's debts--is one she can hardly refuse.

Determined not to let the rogue best her, Beatrice sets out for the infamous House of Madame Chamfleur to learn how to appease Ritchie's well-known sensual appetite. Soon the couple is playing out exquisite fantasies...and feeling emotion that goes deeper than flesh. But Ritchie harbors a shocking secret, and Beatrice must decide if she's prepared to give up everything for a man who can offer her nothing, but who's come to mean the very world to her.

IN THE FLESH is officially available today from Amazon.com, Amazon.co.uk and Barnes and Noble in a mass market paperback edition. It's due out in an ebook form on 1st April [some would say that's very apt when it's something I've written... LOL] in the epub format from venues like eHarlequin, Barnes and Noble, All Romance eBooks and Diesel eBooks.

A Kindle ebook will surely appear before long, but I suspect it won't be before 1st May. If I had my way, all editions would come out simultaneously all over the world on the same day, so everybody who wants a book can buy it in whatever form they like best. But alas, publishing doesn't work like that.

I'll certainly be posting here as soon as a Kindle version pops up, and also tweeting the news too. Or you could join my mailing list for the latest news on IN THE FLESH and other titles.
Posted by Portia Da Costa at 11:13 am 2 comments: