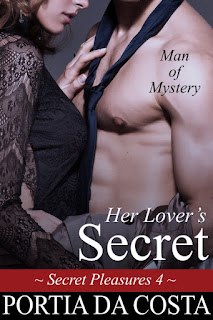 As you know, I've been writing a thing called Thing, a sort of generally romantic women's fiction non-plotted writing exercise just to keep my hand in. I've done about 8K of this 'thing' so far, and while I like it, it's not really going anywhere as, of course, it has no real structure, no angst, no conflict, and none of the other things that constitute a good piece of fiction. But, I'm not writing it to sell. I'm writing it to keep writing, in the hopes that soon I'll return to writing something readers will actually enjoy.

However, I'm now starting to feel inklings of an urge to return to the project I was working on when I stalled, which is a sensual romance romance novella, #4 in my Secret Pleasures series. It was called The Boss's Secret, but I've decided that doesn't really fit right. Lawrence, the hero, is more than Rachel's boss. He owns the company and quite a few others. I see 'boss' as someone that a character interacts with every day, on site, whereas Lawrence is a distant, lofty figure who only very occasionally might visit her workplace. So, a new tentative title is Her Lover's Secret, which I think is evocative and fits the story better.

Her Lover's Secret started out with one hero template, and now has a different one, probably just as unlikely. He's a gorgeous man, but not conventionally so. As Lover's Secret is an older hero story, he has white streaks in his hair, and he's in his late forties. He's also about 6' 7" tall!

Above is a draft cover I designed for Her Lover's Secret, but I'm not sure I'll use it. I may even go mad, and get a pro designer to do me a cover. It's rather difficult to find cover images when you have a very specific looking hero with silver streaked hair, so you generally have to go with a 'headless' cover in these cases. And show his chest rather than his face and hair! LOL