It's a week now, since Mork and Mindy arrived, and although progress is slower than we expected, they're starting to settle in a bit now, and become happy in their new home.

These two are very timid cats, who've had some disruption in their lives in the last eighteen months or so, which means it was never going to be easy for them to adapt to the biggest disruption yet, ie. to be suddenly dropped into a strange house, with unknown people, away from everything and everybody that was familiar to them. But, we're starting to turn corners now. At first, they would not come out from their hiding place beneath the settee when either of us were around... but gradually we're starting to see more of them, mostly in the hours of darkness in the evening and in the morning before it gets light. And when we do see them, and they come to us at quiet settled times, they are the most adorably affectionate pair. They love attention and fussing and both have incredibly loud purrs. They will also get on the bed at night now too, especially Mindy, who seems to have taken to me during after hours time.

Even though I think it will be a while before they fully settle, I feel that they're going to be enormously rewarding cats and wonderful companions. Himself and I already dote on them completely.


Sorry the pix aren't very clear, but hopefully we'll be able to capture better, much sharper images of this handsome pair when they spend more time out and about in full daylight.

Email ThisBlogThis!Share to TwitterShare to FacebookShare to Pinterest
Labels: cats, Mork and Mindy

We are cat people again... 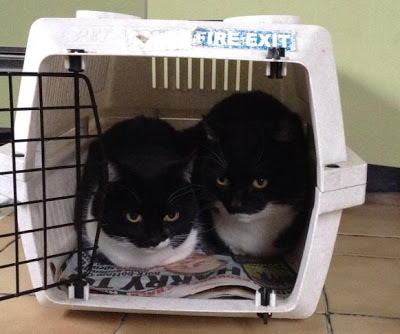 I'm thrilled to present the two gorgeous new cats who've just come to live with us. They're Mork [L] and Mindy [R] and they're a brother and sister, who we've adopted from someone who can't keep them any more.

They're very nervous, unsure of themselves and shy at the moment, as is natural. Mindy has taken refuge behind the washing machine for the time being, and Mork is staying put in the basket. But I'm sure they'll relax before long, and begin to explore their new home, and feel comfortable. I think it'll be an easier acclimatisation for them, because they're together, and each has the reassurance of their constant, known companion.

The fact that they are devoted to each other is brand new for us, as all our previous cats have come to us at different times, and have never really got beyond the stage of being 'used to' each other, and tolerating each other. To have a couple of cats who are real soul mates is a novelty, and absolutely delightful!

Look out for lots more photos as they get used to us and come out to investigate the house.
Posted by Portia Da Costa at 12:32 pm 6 comments:

Email ThisBlogThis!Share to TwitterShare to FacebookShare to Pinterest
Labels: cats, Mork and Mindy

The Red Collection - out today! 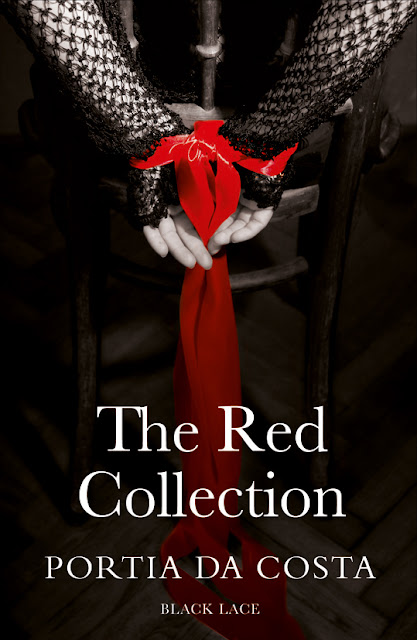 Thrilled to announce my latest book from Black Lace!

THE RED COLLECTION is a jumbo anthology of my previously published shorter work. It's stuffed with my short stories that have appeared in Black Lace anthologies, two chunky paranormal novellas, BUDDIES DON'T BITE and ILL MET BY MOONLIGHT, and one or two other bits and bobs.

For a list of the goodies, a bit of info, and a teeny tiny taster, zip along to:

Available from the Amazons thus far, other online outlets hopefully to follow, and also from physical bookshops and supermarkets various.
Posted by Portia Da Costa at 12:44 pm 2 comments:

I've been ill the last few days, with a dreaded lurgi that's going around. But look what arrived while I was laid low! 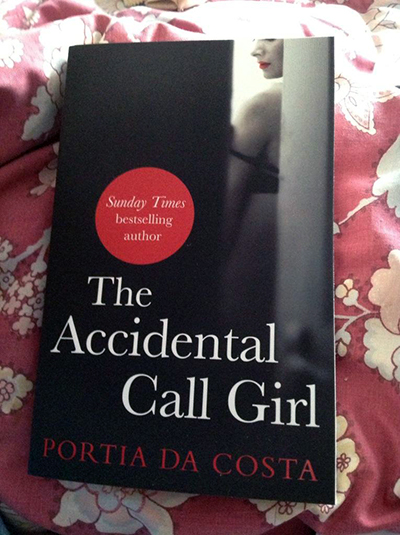 As it's the new year, I decided that I'd try a new look, both here and over at my web site. I've been meaning to do something for ages, because the pink and fluffy, with a Victorian background, just isn't in sync with what I'm writing any more. I do have another Victorian book coming out, but even that has a restrained black and white cover.

The new colours are to match, more or less, the livery of my Black Lace books nowadays, especially the Accidental Trilogy... though the header is my evocative blindfolded girl... Gwen, from In Too Deep.

There's still a lot to do, a lot of tidying up and improving, but I feel better for starting to make changes and starting 2013 with a sharp new style.
Posted by Portia Da Costa at 11:21 am No comments:

Ecstasy in the White Room

ECSTASY IN THE WHITE ROOM - out today!

"This is a gorgeous room. So white and tranquil and glamorous, like something from a thirties movie set.

From his pocket, Simon retrieves a white plastic rectangle. It's an invitation to a very exclusive private function, extended only to certain guests. The white card was in our welcome basket, along with the sex toys, and neither of us was quite sure whether we'd accept tonight... until now."

Suzanne and Simon check in at a luxurious hotel which provides very special services and enjoy the unique facilities of The White Room.

The best suite in the hotel, it comes complete with discreet bondage accessories and the mirror on the ceiling is a particularly provocative feature... not to mention the complimentary casket of exclusive, high end sex toys.

NB. To get the most out of ECSTASY IN THE WHITE ROOM, you'll need to read DISCIPLINE OF THE BLUE BOOK first, and then RITUAL OF THE RED CHAIR! :)
Posted by Portia Da Costa at 12:27 pm 1 comment: