Just sweeping in for a quick blog post to mark a doubly auspicious day!

The first happening is the publication day of THE ACCIDENTAL MISTRESS, the second novel in my 'Accidental' trilogy about bold, impulsive Lizzie Aitchison and John Smith, the gorgeous multi-millionaire she first met when he mistook her for a high class escort in THE ACCIDENTAL CALL GIRL.

MISTRESS is about John and Lizzie trying to negotiate a proper relationship, rather than just what seemed like a lovely, but temporary fling, in CALL GIRL. It's a very sexy story, naturally, but it's all about the two of them working out other issues too, and balancing two lives that are very, very different.

You can find out more information about THE ACCIDENTAL MISTRESS and read an excerpt HERE.

The other exciting thing going on at the moment is the arrival of yet another cat at Casa Da Costa! 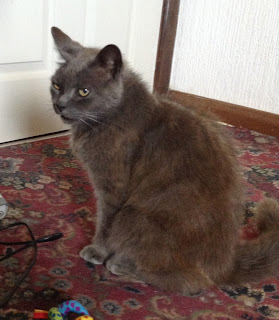 This is Prince a cat we've adopted all the way from France! Himself went down to the Loire Valley, on a motor cycling holiday, to stay with some friends, and while he was there, he struck up a relationship with a stray cat who'd... well... just been abandoned by his owners. One day Prince had a home, and someone to feed him etc, then next, they upped sticks and went, leaving him behind to forage for himself. I find this unbelievable, but some people are like that. Prince had been on his own since April, eating lizards and whatever else he could catch, but once himself started feeding him and paying him attention, he instantly became friendly and appreciative. Cat and man formed a bond, and himself knew he couldn't just up sticks and leave Prince!

Of course himself couldn't bring him back there and then, not only because of being on the motorbike, but because of animal import formalities, but he's just been back in the car, a month later, and has brought Prince home to live here with us. He's currently confined to the living room, with Mork, Mindy and Felix shut out of that room, so we can effect a gradual and diplomatic introduction when Prince has had time to recover from the journey. He's already settled well, has been eating lots, and has shown instant affection to me. He's a real sweetie!
Posted by Portia Da Costa at 12:06 pm 4 comments: