not to be outdone 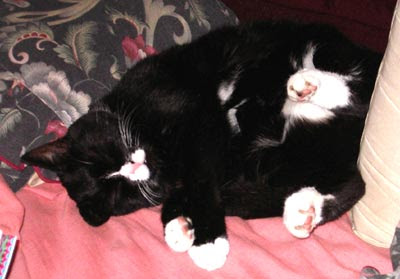 not to be outdone by Tilly, the supreme champion of demented posing - King Kuffer - hits back with killer!

I really must snap a few shots of Alice and Mulder soon, as the lads seem to be dominating this blog at the mo...
Posted by Portia Da Costa at 8:05 pm 3 comments:

Well, I think I'm beginning to get a handle on that paranormal story of mine... but even though I might end up with something I quite like, I still don't feel all that optimistic that the editor will like it. It might end up being one for a future self published shorts collection or something... It's been very weird to get the tone for this thing. It's more a slightly fun story, and not linked to any established mythos... just something inexplicable that may or may not be a trick of the imagination. Don't know whether this can be classed as paranormal or not, hence some of my doubts about it. If I get it right though... it'll be one for the delectation of my Vincent friends... I think the title alone gives sufficient hint of that... ie. the thing's called Watching The Detective!

Have been watching stuff to do with ballet in the last few days, as background research for TechnoGothic, which has an ex dancer as a heroine. Some behind the scenes stuff has been particularly useful, and now I'm watching a performance of the great romantic ballet Giselle. Masses of elements of gothic tragedy in this story... and the juxtaposition of love and death is always powerful, but the plotline really does irritate me in a lot of ways because Prince Albrecht, the supposed hero, is such a jerk! And Giselle herself is a nitwit for falling for such a selfish user. Down to earth Hillarion is the guy who really loves her, and what does he get? Bumped off by the magic dancing fairies when he should actually be *rewarded* for his love and devotion! While soppy, self centered Albrecht gets away with it... He's supposed to be eternally sorrowful, but I bet you anything when the curtain goes down he v. quickly gets over it and is back to chasing innocent peasant babes in a different village to get his end away before very long...