A freebie for the New Year!

To celebrate the New Year, I'm offering AN APPOINTMENT WITH HER MASTER, a brand new to digital short story, FREE for two days via Amazon.

Shy, but secretly sexy and imaginative, Mary-Anne Green fantasizes about having her bottom spanked by a stern and powerful master, the beautiful, cultured hero of her wildest dreams. She longs to feel the hand of a dominant man upon her, punishing her flesh, then caressing it to the heights of exquisite pleasure.

It seems that these wild scenarios are destined to remain solely in her imagination, until one day Mary-Anne meets her dream master online. Their chemistry is electric from the very first moment, and their fantasies and desires a perfect, sizzling match. In email after email they share everything. Dark urges, wicked wishes... painted pictures of fiery, passionate punishment.

But what happens when Mary-Anne and her Master decide to meet each other? Will the delicious, painful magic survive the transition to reality? Will their intimate bond be all they hope for, and perhaps more?

A much shorter version of this story has originally appeared in print under the title "It Had to Happen".

An Appointment with her Master is also free to borrow from Amazon.com for the next 90 days, if you're a US Amazon Prime member.

As part of the scheme for authors that allows us to make our titles free for a number of days, and allows free borrowing by Prime members, Amazon does ask that we sell those titles only via their web sites for 90 days. If you don't have a Kindle reader, you can still read them via the Kindle Desktop application here, and please be assured that after 90 days, An Appointment with her Master will be available at other ebook outlets and in formats suitable for all other readers.

Posted by Portia Da Costa at 7:27 pm No comments:

A new release from my writing buddy Saskia!

ps. you simply can't go wrong with WINNER TAKES ALL, because it's published at a super value price too. :)

A Gentlewoman's Dalliance - the cover 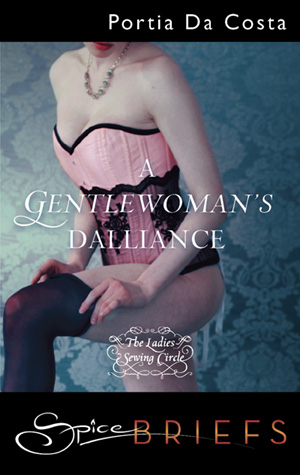 Here's my latest Spice Briefs cover. It's for the fourth - and sadly last - of my Ladies' Sewing Circle Briefs, A GENTLEWOMAN'S DALLIANCE.

Mary Brigstock and her husband have no difficulty maintaining the passion in their marriage, but even the most ardent lovers crave new experiences. When Mary tells the Ladies’ Sewing Circle that she wants her husband to spank her, their worldly hostess arranges exactly what she desires: the services of an expert disciplinarian who can teach the Brigstocks how to make their wicked fantasy a reality….

FIRE AND ICE - officially out today 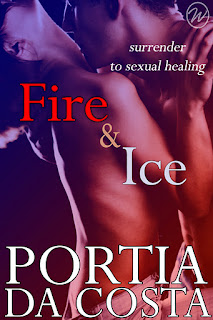 A couple of years ago, himself installed a new central heating system in our home. He did a mighty good job, and since then, in winter, we've been toasty and warm, with a boiler and radiators that perform efficiently, economically and are much 'greener' than the old system. But, for the period he was doing the installation, it was very, very cold in here, because it was also the dead of winter when he did it!

The result of these endeavor was FIRE AND ICE, my winter/Christmas extravaganza that originally appeared in the Mammoth Book of Hot Romance. You could say the very anthology title *really* seeded the story line, as I just knew I had to play with the concept of heat - and its opposite - in the tale.

And now, I'm self publishing FIRE AND ICE as an individual long story, with a few tweaks and polishes along the line, because we writers can't bear not to keep tinkering. As well as a seasonal story, it's also a boss and secretary, or in this case, boss and P.A. story, because heroine Cally also works for the deliciously hunky hero, Innes, in between completely adoring him.

Super efficient P.A. Cally Hobbes is head over heels in love with her handsome boss, the urbane and delicious Innes McKenzie. Day after day, beneath her cool, businesslike exterior, she's simmering hot for him, and she knows he's not entirely immune to her either, despite their perfect, above board working relationship.

Icy weather, a broken central heating system, and a dose of 24 hour flu suddenly change everything. With Innes alone and laid low in his frozen flat, Cally's golden chance to get close finally arrives. Innes is freezing, and she's burning for his touch, so what else can a girl do but climb into her boss's bed to warm up his chilly limbs with a dose of body heat?

An overnight recovery quickly leads to a very different kind of therapy... making all Cally's dreams of passion flame into life. Sex with her beloved Innes is everything she's fantasized about, and more. Much, much more.

But will their mutual desire and tender feelings survive a return to office propriety? Working together as P.A. and boss again, can Cally and Innes share the lasting glow of love?

FIRE AND ICE is self published via the Walk on the Wild Side Books authors' collective and if you'd like to read an excerpt, you'll find one here, along with links to buy it at various online outlets.

And this is a picture of me in that woolly hat! :) 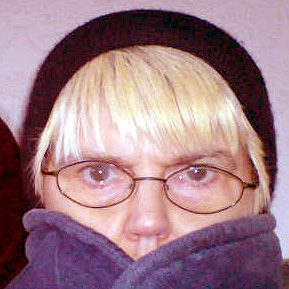