One of my favourite films... 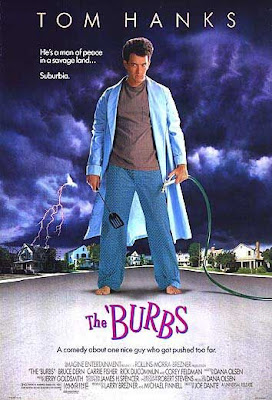 Himself is away at the moment, tramping around the Market Garden battleground sites of the Low Countries... and I'm left on my own, minding the cats and missing him. However, last night, one of my all time favourite films was on the telly, and I have to say, it cheered me up mightily!

I love THE 'BURBS!!! I've seen this film umpteen times, but it still makes me smile, giggle, and laugh out loud in places. I love Tom Hanks in anything, and I think this is one of his best comedy roles, although he is ably supported by a bunch of other talented actors. I love the combo of fun dialogue and out and out slapstick in this movie, and even the music is brilliantly appropriate and witty. There are dozens of standout moments, but for me, the scene that always makes me laugh out loud for some reason is the one where poor old Ray/Tom has to eat a sardine off a pretzel, whilst visiting with his creepy neighbours, the Klopeks. 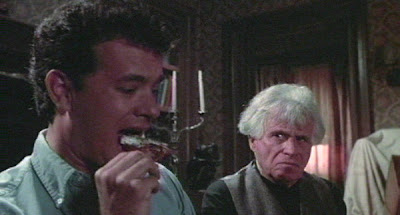 I really don't know why this is so amusing to me, but every time I see it I howl with laughter, and last night was no exception. The cats thought I was bonkers, chuckling and chortling away at this scene, but they are being indulgent with me, because I think they know I'm missing the company of their 'dad'...

In other news, I'm still slugging away at Gothic Heat. Today has been pretty standard with it. One minute, I'm quite contented, enjoying what I've written, and gaining satisfaction from tweaks and improvements... the next, I'm in a tearful panic of horror with it, and wishing, wishing, wishing I'd never agreed to write it and that I was free to work on something else, less hideously disorganised, flung together and inconsistent. At the moment, I'm somewhere in the middle of those two states... sort of enjoying a new scene I'm inserting, which reintroduces Michiko, the Japanese white sorceress from Gothic Blue. This is fine, because I like her, but against my wishes, she's suddenly acquired a new Japanese boyfriend called Hiro... completely out of the blue, and yet another character in what could turn out to be a cast of bloody thousands!


Don't forget Portia's Promos - new stuff being added all the time!
Posted by Portia Da Costa at 4:38 pm No comments: