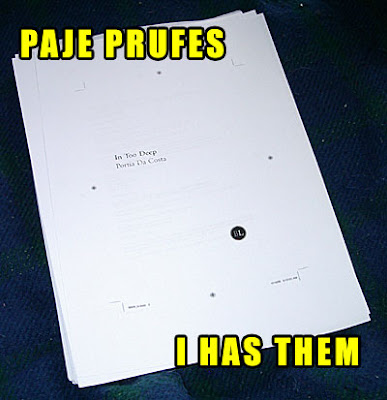 Agh! Agh! Agh! The page proofs of IN TOO DEEP have arrived!

Now, I should have expected these imminently, as the editor asked if I could turn the book in three weeks early, but it was still a shock when postie handed them to me this morning. I usually get a 'heads up' that they're on their way, but obviously things were too hectic and no warning was sent.

Page proofs terrify the bejesus out of me because at this stage, it's too late to make anything but the most essential changes to correct any spelling and punctuation bits that have slipped through the editing process. Obviously the book must be generally okay, as I wasn't asked to do any corrections, but it's a bit [lot] disquieting when you turn in a book and the next thing you know, the proofs arrive! It's the next to final stage...

Anyway, as gentle readers of this blog will know, IN TOO DEEP was one of those books that was both fun, and a total beyotch to write. As most of mine are, nowadays... But it's also one I ended up loving, and smiling at the end of, happy for my characters, Gwendolynne and Professor Hottie aka Daniel. Despite it's naughtiness and rampant sexual shenanigans, I think romance readers will like the way it goes. :)

It's available on the 4th September [my wedding anniversary!] in the UK and 11th November in the US, and you can pre-order now [if you want...] from Amazon.com