Ack, another blogging hiatus! I'm terrible, aren't I? I wish I could say it's because I'm pouring out thousands and thousands of shining words, but it isn't. I'm just foofing about wasting time, as usual.

I am working today though, on a short novella/long story for Spice Briefs. It's the second in my as yet unseen 'Gentlewoman' series, and it's about Mrs Prudence Enderby who gets abducted by an exotic rogue and made to perform erotic naughtiness for him in his luxurious perfumed hideaway. Hee! At the moment, she's being 'prepared' for him by his two hunky minons, Clarence and Yuri, who are very well set up lads, shall we say. Cue much perfumed massage and pampering... Frisky Prudence ought to be far more scared and ashamed than she actually is. She's a somewhat randy Victorian miss, and likes to go with the flow... LOL

Watch this space for more news of this mad but fun story! 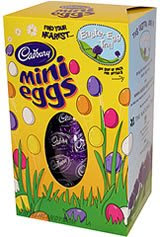 It's Good Friday and I'm eating one of these! Not all in one sitting, of course, but those mini eggs are awfully more-ish. :)

Nothing much else exciting happening here. Am still trying to maintain my positive outlook and determination to think nicer thoughts... although it's not easy in these times, and with my natural disposition towards being a miserable old curmudgeon! LOL
Posted by Portia Da Costa at 2:10 pm No comments: 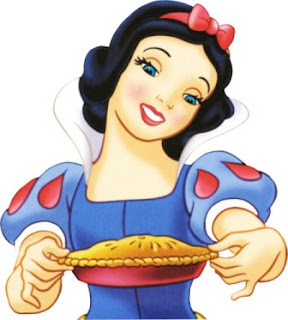 I have decided that I'm going to try and be a bit nicer from now on, and not give in to my envious, curmudgeonly and chainsaw-wielding thoughts... Being a grumpy malcontent doesn't do anyone any good, least of all me.

So here, have a metaphorical pie of loveliness and benign thoughts from me, and enjoy your day! :)
Posted by Portia Da Costa at 12:10 pm No comments:

Not much here today, but...

There's a teasing micro excerpt of my current WIP - Another Chance - over at my Portia's Prose blog!

Email ThisBlogThis!Share to TwitterShare to FacebookShare to Pinterest
Labels: Another Chance, excerpts 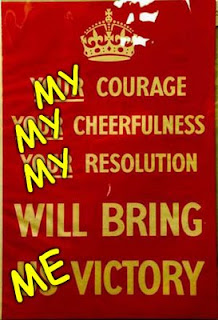 Hoping this'll work better than moaning and whingeing all the time! LOL
Posted by Portia Da Costa at 9:33 am 4 comments:

Email ThisBlogThis!Share to TwitterShare to FacebookShare to Pinterest
Labels: motivationals 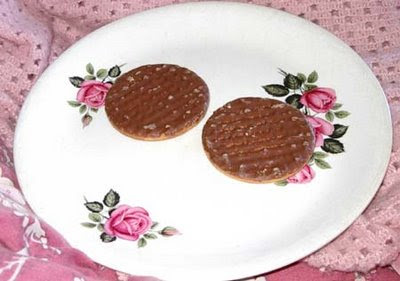 Times are hard, and I'm reduced to Tesco's 'value' chocolate digestives for my mid morning treat. Still yummy, though, but I yearn for the days of Hotel Chocolat and luxury muffins and whatnot... :(

Any road up, I know I've been a very poor blogger lately, so will attempt a bit of catch up here...

Another Chance is nearly complete, but Ravishment is yet to be started. They'll both appear sometime in 2010, Ravishment in Spring, probably, the month after its sister story, A GENTLEWOMAN'S PREDICAMENT is published, and Chance, later in that year.

My next publication, due out on 1st May, is TWICE THE PLEASURE, the first in my Risque Reunions trilogy for Spice Briefs. I'm hoping that the other two stories in this trio appear in consecutive months... Twice is about Caitlyn, who, returning to her old high school college for a ten year reunion, meets up with the beau she was besotted with back in the day... and who unfortunately didn't seem to be besotted with her, because he was besotted with his best male buddy! But all is not as it seems, and the three old college mates come to an erotic and deliciously wicked understanding.

What else have I been working on recently? Well, my first ever full length historical erotic romance! This is a first for me, as I've always been shy of attempting something that needs so much research, and have also always felt that I'm a person very much rooted in the contemporary... But the idea of writing a historical was suggest to me, and really took my fancy, so I thought I'd give it a shot and have written a proposal for a hot historical set in the late Victorian period. I must stress this is only a proposal, and not a commissioned work... so it's in the lap of the gods as to whether it'll meet the approval of an editor... In these tough times, when publishing opportunities are at even more of a premium than ever, I'm going to need the crossed fingers, toes and miscellaneous other extremities of all my friends and fans if 'victorianoid' is to succeed!
Posted by Portia Da Costa at 10:33 am 4 comments: 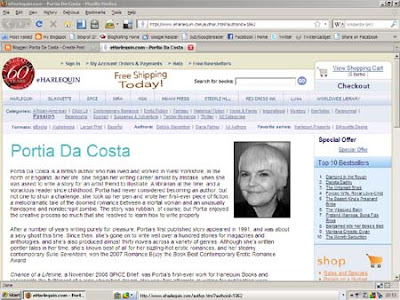 Wahey, I now have my own author page at eHarlequin!
Posted by Portia Da Costa at 8:51 pm 4 comments:

Email ThisBlogThis!Share to TwitterShare to FacebookShare to Pinterest
Labels: eHarlequin

My web site has been woefully out of date in terms of excerpts lately, so I'm attempting to catch up and post some. In the last couple of days I've added tasters of the following:

KISS IT BETTER - Black Lace due June in UK/Aug US

TWICE THE PLEASURE - Spice Brief due 1st May

SHADOWPLAY - Black Lace reprint due November in US