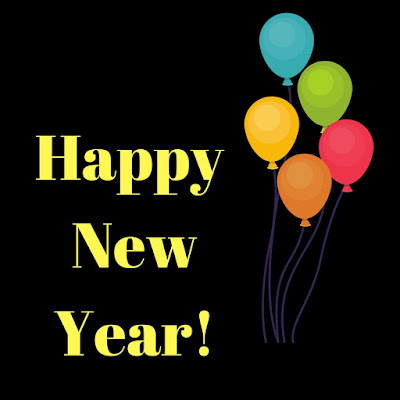 No resolutions... just hopes for a good year!
Posted by Portia Da Costa at 11:08 am No comments:

Seasons Greetings... Prince is not amused... 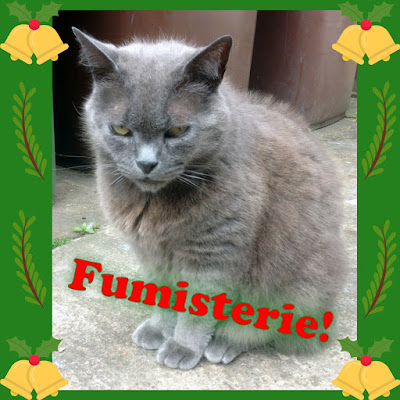 All the best for the Festive Season!
Posted by Portia Da Costa at 4:25 pm 2 comments: 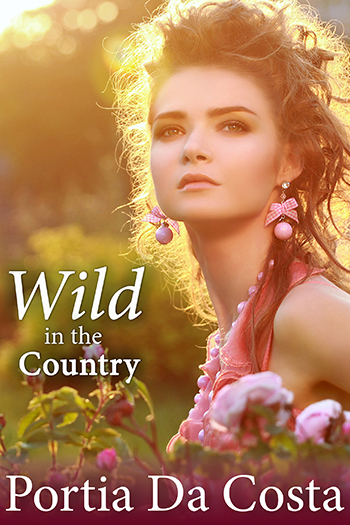 I'm currently working towards self publishing this older title of mine, WILD IN THE COUNTRY. And this cover perfectly expresses my vision of Flora, the heroine. When we were discussing ideas for covers for Wild, my buddy Saskia Walker mentioned the dreamy sensuality of the old Cadbury's Flake television adverts, and that really inspired me! With that in mind, I was lucky enough to find this image fairly quickly on a stock site.

Although WILD IN THE COUNTRY has been published before and edited twice, I knew it needed a bit more work. Mainly to pick up odd little punctuation blips and things that slip in during file conversion and what have you. But as I worked on it, I knew I had to make some slight changes to the story. This book was originally written as a kind of crazy sex romp, with Flora as a free spirited girl, kicking over the traces of an old, more boring life, when she moved to live in a village full of rampant sensualists who enjoyed partner swapping and a host of wild erotic games. That's still the main... er... thrust... of the story, but thinking about Flora, and Declan, the central male character in the story, I wanted to give them a real romantic relationship. One that starts as part of the sexual experimentation they both enjoy in the village community, but growing and developing into something deeper, more forever... and in the end, exclusive.

But that has to develop properly, and Flora can't go straight from wild experimentation, with Declan just one amongst a whole bunch of equally important lovers, to snap, he's The One. So I have to build in some more gradual realisation of their growing affection, maybe even an evolution that neither she nor he are consciously aware of while it's building.

And of course, that takes much longer to do, and a lot more brain thrashing than just a simple check for misplaced punctuation and whatnot. I was hoping to get the new version of Wild out before Christmas, but if I'm honest with myself, I don't think that'll happen now.

Will many people read this new version when I've written it? Who knows... But I'll have had the pleasure and challenge of revamping and revising it. A bit of proper mind work, to keep the old little grey cells from atrophying!

And if anyone fancies a flavour of Flora *before* the revamp, you'll find her as Katy, in IN THE AIR TONIGHT. Many of the usual Wild suspects are there too, but under different names... 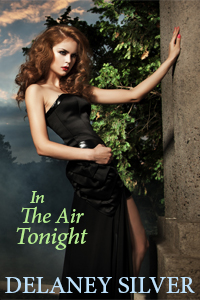 Who is Delaney Silver? 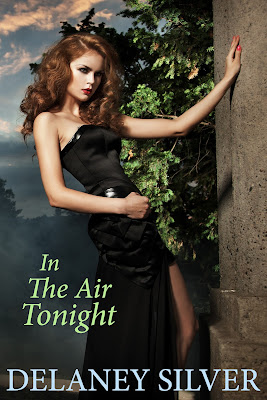 This is my latest release under my alter ego pen name, Delaney Silver. My Delaney books are a bit edgier, a bit racier and more explicit than my more recent Portia Da Costa books. They're self published titles, short stories, mostly, that were originally published at a time when I wrote erotica that was meant to be read by men *and* women... or even couples together!

IN THE AIR TONIGHT is very much in the women's sexual exploration vein, featuring a heroine who's wild and free-thinking, and who enjoys relationships with several different lovers who live in her local village. It's actually a spin-off from a Portia title that I'll also be republishing soon, WILD IN THE COUNTRY. The revision work I'm doing on Wild means that the central couple choose a committed, exclusive relationship towards the end of the book, whereas Katy, the heroine of IN THE AIR TONIGHT, is a  hold-over from the previous incarnation of that story, and hasn't settled down with one man alone.

So you could say the characters in In The Air Tonight are alternate universe versions of the people in Wild in the Country.

Does that make sense? LOL


When Katy attends her first formal evening event since her arrival in Briarwood Magna, she’s hoping for much more than just champagne, canapés and routine social chitchat. Her village friends are all adventurous hedonists, who love to party hard and explore all manner of steamy scenarios, and she wants to get in on the action.

Consequently, she’s thrilled when her handsome friend Mitchell touches and teases her behind the concealing ornamental hedge, and then again, inside the manor house, when she succumbs to the Lord and Lady who are fond of dark games of transgressive pleasure amongst the priceless antiques.

Most of all, though, Katy wants to thank her girl crush Sybilla for the aphrodisiac perfume the beautiful herbalist concocted for her… but she gets a big surprise when she discovers just what the scent is that’s been attracting droves of randy admiring guests to her side throughout the party.
Available from Amazon.com, Amazon.co.uk, Amazon.com.au and Amazon.ca

Discover more about Delaney Silver here.
Look out for news of WILD IN THE COUNTRY coming soon. Read a taster.
Posted by Portia Da Costa at 3:55 pm 1 comment:

Email ThisBlogThis!Share to TwitterShare to FacebookShare to Pinterest
Labels: Delaney Silver, erotica, In The Air Tonight, self published, self publishing, Wild in the Country 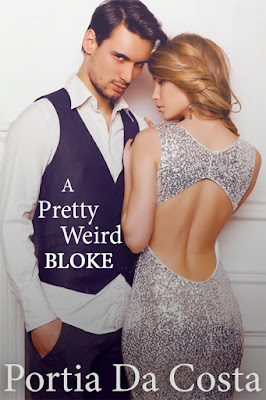 But even though she knows that he fancies her, it takes forever for him to make a move. And when he does, he issues a tantalising warning… he tells her that he’s a ‘pretty weird bloke’.

Nikki guesses that this is something to do with his preferences as a lover, but she’s up for an adventure. Even so, his interest in a certain part of her anatomy - and certain wickedly ‘testing’ things he’d like to do to it - is as unsettling as it is dangerously exciting.

Can she channel her inner daring and handle David’s weirdness… and walk on the wild side with him into dark, seductive pleasure?

Posted by Portia Da Costa at 2:03 pm No comments:

A TOUCH OF HEAVEN returns to Earth! 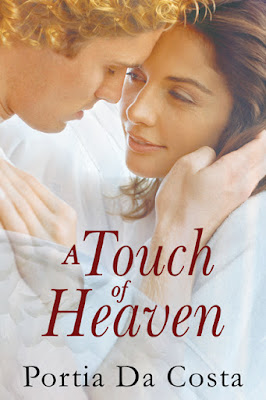 A TOUCH OF HEAVEN is my sensual paranormal romance novella about a gorgeous, mysterious stranger who entrances a forty-something woman who's beginning to have doubts about her own attractiveness. Patrick is house-sitting next door... or at least that's what Miranda hopes he's doing. If not, he's the most handsome, delectable squatter she's ever set eyes on!

TOUCH was originally published by Samhain Publishing a few years ago, but now I've self published it and it's available again at the usual outlets.


Pleasure with a perfect stranger can be divine...

If Miranda Clay believed that angels exist, they’d look just like her neighbours’ new house sitter. Golden hair. Golden, naked skin. Muscles that are poetry in motion. Is it ridiculous that even his feet are beautiful?

When mysterious Patrick turns his heavenly blue eyes toward her and smiles… Well, how can a red-blooded woman resist his friendly offer of a soothing massage? But pretty soon his therapy to ease her forty-something aches and pains turns into an exquisite touch of pleasure, a storm of bliss that leaves her boneless and sighing.

But when Miranda reaches for Patrick to return the favour, he stays her hand—and reluctantly reveals his almost incomprehensible secret. He’s an angel on an earthly mission of kindness, and though he’s always longed to live a full, if messy, human life, he’s never been tempted to violate his unbreakable angelic code. Until now.

Soon, the deeply-in-love couple face a perilous decision, and Patrick will have to risk everything—even the prospect of extinction—to keep the woman he adores in his arms.


NB. thanks to Carolan Ivey for her help with the blurb


Posted by Portia Da Costa at 6:54 pm No comments:

Looking for something short and sexy and told from the male POV? Well, look no further! 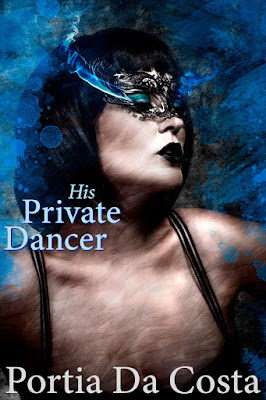 HIS PRIVATE DANCER - a decadent tale of saucy burlesque

With a front row seat at a private burlesque show, Mr Curtis finds himself bewitched and seduced by the gorgeous Madame X.

As the silken gloves and feather boa go flying, the mysterious beauty works him up into a fever of desire with her steamy, exotic moves.

Will there be an encore? An even hotter show?

Posted by Portia Da Costa at 7:00 am No comments:

Lessons and Lovers - now in print! 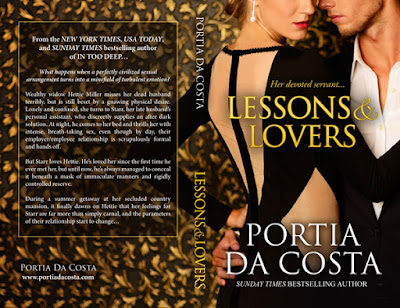 By day, he's the perfect personal assistant, bodyguard, chauffeur… by when the lights go down, he's a devastating sex machine, using his hands, his lips and his breath-taking body to drive his employer to the very limits of pleasure.

Wealthy young widow Hettie Miller loved her husband, but night after night, she's tormented by desire. Lonely and confused she turns to Starr, her faultless servant, the man whose cool reserve and discretion hide the wild, hard-driving soul of a sensualist.

But does Starr really care for her, or is he simply performing his duties, as supreme between the sheets as he is elsewhere? Hettie hopes for more… because she's falling, and Starr's rocking her world.

Now available in print from: