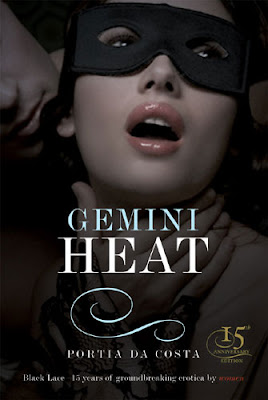 Isn't this stunning? There was an earlier version, which was okay, but didn't have quite the right vibe... but this is perfect!
Posted by Portia Da Costa at 10:57 am 8 comments:

Well, I finally caught up with where I'd previously got to with IN TOO DEEP. What a marathon that was... and it's taken so long that I've probably forgotten a lot of what I was supposed to be recapping. But I'm bloody well not going back *again*, that's for sure! I've started to move forward and I'm going to continue to do so... although I think I'm going to have to try and think things out more, as I go. I'm not sure this hoping for the best and pantsing it approach is working all that well with this particular book. I'm sort of tying myself in knots with the characterisation and the motivation of one particular character. I should have nailed him better first, because the mind-games he's playing throughout the plot need to be more consistent...

But then again, people in real life *aren't* consistent, are they? So maybe this makes the book more realistic rather than less so... it's hard to tell. I only know that there's going to be more, much more editing and tweaking and rewriting and layering to be done after the first draft is finished. Ack!

I've also made a tentative start on the gigantic backlog of web work that's built up while I was rushing to complete THE RETREAT and enjoying Christmas. Now there's a task and a half, 'cos there's *loads* of it! I'm sure it'll move along pretty swiftly though, once I get stuck in.

Himself is back at work tomorrow, so hopefully, I'll start getting more done then. It's jolly having him around, and the hols have been fun, but somehow I can't seem to focus properly when there's someone else in the house, even if he's busy doing something in another room. I seem to need the whole house to myself to be able to work properly.

I'm determined to waste far less time in 2008! It's not so much a New Year's Resolution as a simple hope that I can do better and be a bit more disciplined and productive. Wish me good luck with that one, eh? I'll need it!


Don't forget Portia's Promos - new stuff being added all the time!
Posted by Portia Da Costa at 9:00 am No comments: