Some Words for Wednesday...

Anyone who'd like to read some naughty WEDNESDAY WORDS can nip over to my Portia's Prose blog for an excerpt from IN SEBASTIAN'S HANDS. 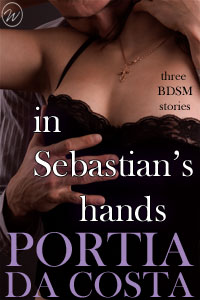 Posted by Portia Da Costa at 6:29 pm No comments:

Rebecca by Daphne du Maurier
My rating: 5 of 5 stars

I think this was probably my third time of reading Rebecca, and each reading has been a different experience. I'm sure I remember that in the first two readings I was very much 'on the side' of the Second Mrs de Winter... but this time around has been quite different.

On third reading, I suddenly find myself deeply impatient with the unnamed narrator, and have formed an active loathing for Maxim. I'm sure they're both accurate products of their time, their ages, and their classes... but still. I can't be doing with milksop women and arrogant, self-serving, insensitive men. I'm not one for brooding tragic heroes who take their woes out on those around them. And even though Mrs de Winter does grow a backbone in the end, it's only to support her husband, who suddenly seems to lose his. And there's something vaguely repellent about her smug anticipation of a future life with him at Manderley, even though she *knows* he's a murderer.

Having said all that... my strong responses to Rebecca only serve to show what an exceptional, indeed, what a truly great book it is. The writing is so strong and vivid and compelling, and to feel the way I do about it can only be because I'm perceiving it as *real*! And when writing/reading fiction you can't really get any better than that.

It's not a romance, as I once thought in my less seasoned younger days. It's barely even a romantic suspense. It's far more a dark, subversive and very unsettling psychological mystery and character study. And all the more for the great enigma at the very centre of it, Rebecca herself. Maxim says what a venal character she is... but then, he's biased, isn't he?

See, I'm talking about it as if it's real again... LOL

No doubt I will probably read Rebecca again some time. Wonder what I'll think of it then?

View all my reviews
Posted by Portia Da Costa at 11:52 am 1 comment: