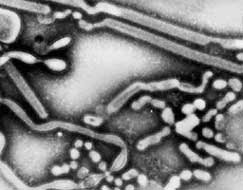 I feel as if I've got some of this crap in my system... or something. Himself has complained of feeling 'washed out' over the weekend, and now I think I've got the same thing. Exhausted, bunged up sinuses and whatnot, bit of a sore throat developing, I think. Basically, I just feel like getting my head down for some kip and generally 'avoiding' the day. Or maybe it's just an excuse to avoid Buddies which is drag, drag, dragging? Or an excuse to avoid all sorts of other things that are bugging me... all sorts of annoyances and general tittage and people being up themselves on the web for one...

Right, time for a bitta lunch... last night's home made pasta bizarro warmed over... which will probably make me feel worse than ever, because I cooked it myself!!!
--
Telly: nonsense
Chocolate: Tesco Belgian Milk
Mood: generally irritated and under par
Writing: about ten words of buddies
Reading: James Bond a bit
RSI: not bad considering
Posted by Portia Da Costa at 1:01 pm 5 comments: