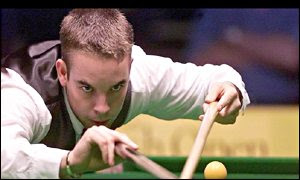 Okay, I admit it, I'm not getting nearly as much done as I should at the moment because I'm addicted to the World Snooker Tournament from The Crucible, in Sheffield. Above is a pic of Ali Carter, currently doing well against one of the long time champs of the game, Stephen Hendry.

I can't play snooker, obviously, as I have virtually no hand to eye coordination of any kind. But I do so love to watch it, and I love the commentaries and the punditry and the fun little asides of the BBC coverage. The cats seem to like the game too, and I often see them watching the run of the coloured balls on the table... I wonder if they think that they're mice?

When the snooker is over, I'm making a serious pact with myself to really buckle down and write. I don't have a strict deadline as such yet, but there's a strong possibility that I may have one soon... And once I've got that deadline, I'll need to meet it. I do feel it's one of the things that's an absolute given if you're to conduct yourself professionally in this game, and make life easier for your editor. I think the only time I ever had to ask for an extension was when I had a major operation! And even then, I got the MS on the editor's desk before my extra tranche of allotted time was over...