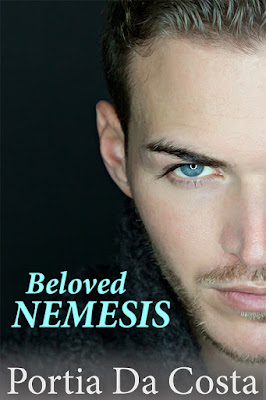 BELOVED NEMESIS is my latest self published release, out this week.

It’s new, but it’s not absolutely, completely and entirely new because a version of it was published almost twenty years ago, in print, by a British publishing house. I was going to release it as-is, as a sort of period piece, but when I came to read through it I saw ways I’d like to change it, and update it… so I did!

Don’t get me wrong, I was proud of the original version, and I loved it. But it was slightly long and on the rambling side, and not as focused on the central couple, Florence and Jacob, as I would make the same story if I’d written it today.

It’s basically the same storyline, the same plot as the 1990s version, but it’s just tighter and gets to the point a bit quicker now, in 2018.

NB. It’s still not what you’d call fast paced… because that’s not what I do. I still tend to witter on and on a bit because it’s hard to change the habits of a lifetime. LOL

A love-hate relationship… a stubborn estrangement… a fiery, reluctant attraction. Where better for a feuding couple to resolve their differences than the most dismal country shack known to humanity?

Rising journalist Florence Trevelyan doesn’t know whether to be thrilled or horrified when she’s tasked to interview a handsome, devastatingly talented actor who’s about to star in a breakthrough role as the dashing lead in a prestigious costume drama.

The thrill is that it’s an interview that can raise her profile and lead to greater things. The horror is that the actor is her adoptive cousin Jacob, who she hates. And while the two of them have no blood relationship, they do have an emotional history. Long ago, they shared a single night of passion and… it did not end well. The pair have studiously avoided each other ever since.

But Florence is a focused professional and she’s determined to get a great interview out of Jacob, even in the face of his extreme provocation and the sizzling chemistry that still sparks between them. An accidental weekend holiday together, in a ramshackle family cottage, could prove a great opportunity to get the job done and perhaps even end their years of enmity… even if ‘roughing it’ in such confined quarters is dangerously intimate.

Will the two cousins finally reach a rapprochement? Will they become friends again… perhaps even a whole lot more? Or will fate throw yet another spanner in the romantic works for Flora and Jacob?

Posted by Portia Da Costa at 2:10 pm No comments: