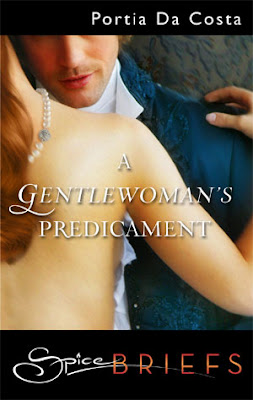 Am very excited today, as A GENTLEWOMAN'S PREDICAMENT has just gone live at eHarlequin for pre-order!
This is a big thrill for me, as I'm sort of officially a historical romance author now, and this is a first peek into the overall 'world' of IN THE FLESH, too, although the characters from the novel don't actually appear in this short. Sofia Harewood, the heroine of Gentlewoman, does however go on to appear not only in the sequel, A GENTLEWOMAN'S RAVISHMENT, but also as a supporting character - under her new married name - in IN THE FLESH.
Something fun, on the Harlequin page, that I hadn't expected, is that the two Gentlewoman books also have a series title - THE LADIES' SEWING CIRCLE! At the moment, there are only the two Briefs, and a reference to the Circle in the novel, but now I'm fancying writing some more short stories about the Ladies who gather, not so much to embroider but to sew seeds of mischief amongst one another. Maybe they could even feature in longer works, such as another novel, or novellas?
Writing more Victorians would be lots of fun for me to do, and also, more stories set in that era would justify my extravagance on books and magazines about those times! Only this morning, I received a copy of The Times from 1889... fascinating stuff!
A GENTLEWOMAN'S PREDICAMENT - available at eHarlequin

ps. as the Brief becomes available at other outlets, I'll post info here and on its page at my site.
Posted by Portia Da Costa at 12:13 pm No comments: