New edition of IN THE FLESH out today! 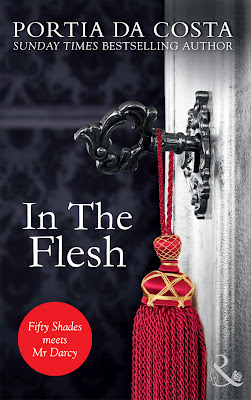 Victorian high society already believes she's a scarlet woman... so why not become one?

Beatrice Weatherly's reputation is in tatters. With scandalous pictures of her being scrutinised eagerly by connoisseurs and condemned by respectable society, and her brother rapidly running them into debt, Beatrice's hope of ever making a respectable marriage is dashed.

Then powerful, wealthy Edmund Ellsworth Ritchie offers an indecent proposal that might save the day... at a cost. His terms are, one month of hedonistic servitude as his sensual plaything, and he'll pay off her brother's debts and settle a fortune on her and her sibling.

But nothing can prepare Beatrice for the reality of Ritchie's scandalous arrangement, and for discovering that she thoroughly enjoys her notorious demimonde status and what's more, she delights in the pleasures and daring games she shares with the handsome, inventive Ritchie.

Very soon, she's addicted to a man who can never wholly be hers... and deeply in love with the master who's bought her body.