I wish I could be this relaxed... 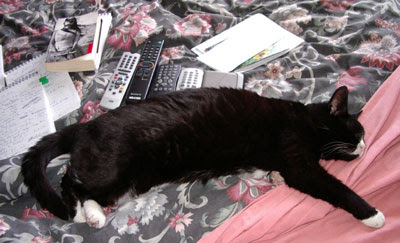 Here's Kuffer, being companionable and lying beside me as I work. He loves to stretch out on the bed, whether it's during the daytime, or at night when other people are trying to sleep too!

Still grappling and battling with Gothic Heat... In fact I was awake at four this morning, with a score of illogical and inconsistent plot scraps floating about in a horrible mish mash. Nothing made sense, and I was half convinced I was actually having a nightmare about the thing... but sadly I was more or less fully conscious.

Surprisingly though, I'm feeling just a tad better about it in the full light of day. Much stuff to do, but I had a slight revelation early on, and remembered something that's supposed to be at the core of the story... but which I'd completely forgotten. Now that I see that though, there's slightly more of an angle. Also had one or two bits of ideas for possible sensual scenes too. So, I'm sure I'll get there in the end, with lots of hard work.

Have had a productive morning on the 'admin' side. Clearing a lot of emails, doing some accounts, bringing a very tiny bit of order to the huge quagmire of chaos that is my working life. Feel v. satisfied about that, and quite positive as a result. Which is a change...

ps. looking at the piccie above, it's dawned on me that I've subconsciously given my blog a similar colour scheme to my bedding! LOL