A new release from my buddy, Saskia Walker!

If you're looking for a tasty menage romance, with a splash of paranormal, look no further than the latest release from my wonderful writing pal, Saskia Walker! Here's what she's got to say about her hot new title, FAYE'S SPIRIT...

Faye's story is the third and final instalment in the Erogenous Zones series, and it's out in ebook format from Total-E-Bound today. Here's the cover copy and an excerpt: 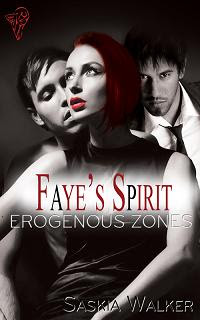 One outrageous weekend with two men, that's what Faye Evans dreams of, but when she meets Jai and Garth—and their live in ghost—she gets much more than she bargained for.

Faye Evans is a woman on a mission. Both her older sisters have had ménage à trois relationships and now Faye too harbours a desire to sample the pleasures of two men, if only for a single wild weekend. The opportunity arises when architect Garth Connor calls her in to investigate the ghostly presence in his business premises. Both Garth and his business partner, Jai Nilson, are gorgeous hunks, and Faye can't help being attracted to them.

Garth and Jai are friends and colleagues but their relationship is competitive. When the mischievous ghost medium walks into their life and shows interests in them both, the edge between them sharpens. While Jai often walks on the wild side, Garth has never shared a woman before, but his desire for Faye makes him rise to the challenge. Especially when Jai quickly picks up on Faye's secret wishes and pushes things along, orchestrating their interactions until the simmering eroticism between them demands hardcore action.


Available now from Total-E-Bound, coming later from other e-retailers and in print.

Do yourself a big favour and check out this fantastic release from Saskia!
Posted by Portia Da Costa at 12:20 pm