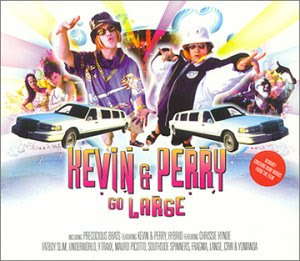 Wahey, my Kevin and Perry CD arrived this morning! So I'm currently enjoying some bangin' Ibiza classics and dialogue snippets from the film. Yeah, I know it's a silly movie in a lot of ways, but I like it... sometimes, it's just nice to escape into total daftness and not to have to worry about any kind of intellectual significance and all that stuff. K&P is sort of like good old British Carry On but with a much better soundtrack... and beneath all the crudity and rudeness, I do think there's a surprisingly warm heart.

Anyway, it's serving its purpose in taking my mind off something I've been mulling over for a day or two, and which prompted my chainsaw post, further down. I've wrestled with this issue before, and it doesn't seem to go away... one of these days it'll come to a head, and I'll have to act, but for the moment, I'm wimping out and procrastinating... The sad thing is though, with my head screwed by this shit, it's hard to write and yet another day is speeding past without anything done towards Sweat70, which pains me because I started so well, and felt it was really, really benefitting me. But I will get back to it... I promise, Mr Blue and Sven, I will get back on track... Nil bastardi carborundum and all that...

On the plus side, while I'm not actually creating new fiction in the form of GOTHIC HEAT, I'm free to concentrate on checking the proofs of an older work which is about to see a new lease of life... ie. the second of my forthcoming Total-E-Bound ebook releases, WILD IN THE COUNTRY. 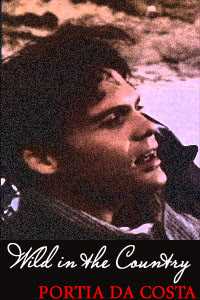 Email ThisBlogThis!Share to TwitterShare to FacebookShare to Pinterest
Labels: crossness, stuff that bugs the hell out of me, Wild in the Country

Kevin and Perry is a fab fun film, I love it to bits! And you're so right re the Carry on/better soundtrack reference LOL