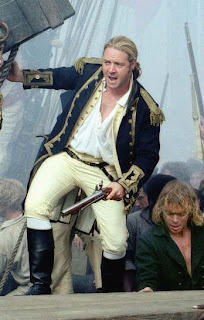 Watched Master and Commander again last night when we got home from the pub... what a bloody good film that is, with a rip roaring full blooded performance from Mr Crowe. Must admit I like him, and he's pretty tasty as Lucky Jack Aubrey in his tight breeches! Wahey! It's a good film all round though - terrific cinematography, and a wonderful recreation of another time and another world. Very touching in places too.

It's been a weird day today. I seem to have been busy all day, but achieved very little. I've certainly done no writing at all... so far. Himself might be going out to meet his biker buddies a little later on, so I may try and do a tiny bit then. If I'm not too tired. I've mainly been doing promo bits and bobs, and grappling with various things that won't work properly. Have been trying to reformat the MS of Gothic Blue, but it's all out of shape somehow, as if there are Word codes under the bonnet that are cocking things up. Might have to export it to another program, but it's all a pain in the @rse to grapple with, and I've got fed up of it for the day. I've also been trying to work out why - on a Googlegroup I'm on - I never get back the messages I've sent to it. It's not a major problem, but stuff like this bugs me when I can't work out the reason for it. It niggles me, and I spend hours trying to work out the reason... when if I just accepted that certain things just can't be done... I'd have a lot more time at my disposal!

Have watched very little telly today, apart from the World Superbikes. Enjoyed that very much, especially the second race, when I was rooting for Nitro Nori Haga and he won! The first race was won by James Toseland, who's a Brit, and who I should support... but somehow, I'm just not sympatico with him... I don't know why.

--
Telly: WSB
Chocolate: cherry cake
Mood: okay
Writing: none yet
Reading: none
RSI/FMS: not too bad