Don't think I'll achieve much today... not only have we lost an hour, due to the clocks going forward, but it's a MotoGP Sunday, so have been spending a few hours watching that, rather than focusing on writing and stuff. Just been watching the 250's... an absolutely cracking race, won by Jorge Lorenzo... and now it's time for the MotoGP itself. Must admit, I sort of root for Valentino Rossi, although himself doesn't like him because he thinks he's arrogant. The bloke probably is arrogant, but with his talent he's entitled to be! 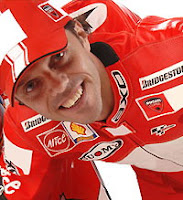 I'd also like Loris Capirossi to do well... I have a soft spot for him 'cos he's older than a lot of the other riders and has been around for a long time. He always seems to have a smile for people, and he doesn't seem arrogant. Mind you, today, he'll have other things on his mind as his wife is about to give birth to their baby!

Apart from the distraction of motorcycle sport, there's plenty of stuff I need to get on with. My Sort Out Sunday initiative doesn't seem to be doing all that well so far... Have only really had one good day of it, so I could really do to get in a couple of sorting later today, if I get time. The place is still horrific, not really improved from any of the photos I've posted here in the past, so I really must keep at it, if only at a slow, steady pace.

On the writing front... I need to find some extra 'angles' for Smalltown. I've got a 'situation', but not a huge amount in the actual plot department. There is a somewhat emotional angle I could use, but I'm wondering if it might be a bit too angsty for what I was planning as a lightish, sexy book... What do you think, would a bit of 'angst' work in a PDC erotic romance? A bit of seriousness... a bit of a real issue in the heroine's past to be dealt with? I don't know... I'm don't know whether I'm up to it. I have no psychology qualifications... I don't know whether I can address this thing with the ring of truth... We'll see...

Have also been looking at some old short stories of mine and I've been wondering about finding new homes for them. But I wouldn't want to re-place them in the form they're in... I think they need revamping and improving before I send them out. I've been writing a long long time, and yes, I've lost some of the freshness and the verve that I had in the earlier days... but I have learnt a helluva lot too. I still make mistakes, but I think I'm generally a lot smoother and more polished writer than I used to be...

I think go for the angst if it's there. To deny it would be cheating a bit wouldn't it?? I know you'll make it work if you want to. :)

Yeah, that's my inclination, Sasha... But the angst doesn't have to be there if I don't want it to, because it depends on an event in the backstory... but I'm not sure yet quite how this event goes.

So no cheating involved... 'cos I might decide to go with the less traumatic event in the backstory. It does seem a bit heavy, and I'm not a 'heavy' writer and I think it might need professional psychological insights to deal with the aftermath of such an event.

I would hate for a reader, who's had something like that happen to them, to read my story and be angered if I didn't handle it correctly or sensitively enough.

Plus, I write to entertain, not to upset.

Does all that make sense? :)