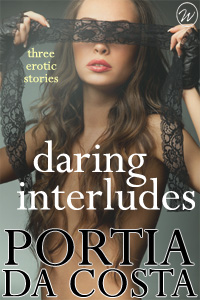 Apropos of nothing, and just because I can, I've decided to put my self published title DARING INTERLUDES on special offer at Amazon for a limited period!

Daring Interludes is a little collection of three short stories, based around the general theme of "games lovers play". Each one features an established couple, who've been together for a while, and the enrichment that a bit of sexual experimentation brings to them. All three are different, and range from the almost sweet [but still hot] to the very, very edgy indeed.

In Concubine, Merry spices up her lover Rick's convalescence after a broken ankle, by telling him a sexy fantasy tale, a la Scheherazade, and casting herself as an exotic courtesan, and Rick as a noble, all powerful prince.

In Silver Screen, things take a much riskier turn when the heroine is compelled to take a walk on the wild side at the behest of her dangerously inventive lover... and the outcome is even wilder than she'd anticipated.

In Naughty Thoughts, Vickie and Terrence's love life moves up to an even more sizzling level when she admits to him that she fantasizes about being spanked while they're having sex!

These three stories add up to a satisfyingly chunk ten thousand plus words, but the Kindle ebook also contains another tempting two thousand words of tantalizing tasters [try saying that when you've had a few!] for some of my other titles, namely, IN SEBASTIAN'S HANDS, FORBIDDEN TREASURES and POWER OF THREE.

You can read a teaser for DARING INTERLUDES here and purchase it from Amazon.com and Amazon.co.uk