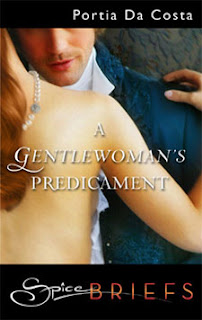 I'm thrilled to announce that A Gentlewoman's Predicament is published today! Although most people who visit here will know that because I've been battering on about my first historical Spice Brief and it's imminent arrival for long enough... :)

Have got to admit that I'm a bit nervous about this one. Though I experimented with some historical scenes in Gothic Blue, this is the first entirely historical work I've released and it's a definite challenge to create a period 'voice' when all I've ever really done until now is work with modern characters and settings. I hope it works. I think it works. My editor certainly seems to like it. But now it's up to the readers to judge whether I've pulled it off. Eek!

Anyway, back to A Gentlewoman's Predicament. It's already available from eHarlequin and Kindle, and by the time you read this it might also be live at Diesel Ebooks. It's also listed at the Mills & Boon ebook store, but I'm not sure whether you can buy it there yet, as it's listed as a June title. I'm sure it'll pop up at other outlets soon too, so check at your favourites.

Here's the official Harlequin blurb for 'Predicament'. I must admit, it contains a little bit of a spoiler, but it's not really a problem as Mme. Chamfleur's naughty secret is very quickly revealed in the story. ;)


"Sofia Harewood's problem: finding a partner who can please her in the bedroom better than her disappointing first husband! She senses there should be so much more to lovemaking—and she's determined to discover what she's been missing.

Sofia's mission takes her to A. Chamfleur, purveyor of "Intimate Advice to the Gentlewoman"...but the encounter is not at all what she had imagined. For A. Chamfleur turns out to be Monsieur Chamfleur—and he and his associates are more than willing to introduce Sofia to a new world of sensual delights....

And look for Portia Da Costa's next story of Victorian sensuality, A Gentlewoman's Ravishment, the second installment of the Ladies' Sewing Circle series."

Portia, good luck with this! Just downloaded it from the e-Harlequin site! It'll be wonderful, I know it!

And I'll be looking VERY forward to that full length Spice Victorian.

Ooh, I hope you enjoy it!

And congrats on your own release day too. I know Sinful will be a huge, huge success! :)

Your cover is lush as well. That guy has a fabulous back and a magnificent rear. ;)

Many congratulations, buddy! This is such a deliciously fun story, I know your readers will love it to bits. I'll be toasting you tonight!

Cheers, me old mate! I should be quaffing Spiced Madeira to celebrate this release, shouldn't I? But it'll probably just be Tesco's lager instead. LOL

I hope it sells and sells and people buy and buy!

Enjoy the tipple - I'll be toasting you with hot run and lemon.

Yay! Congrats on the release, Portia. I know it'll do super well.