A big day for Big Science! 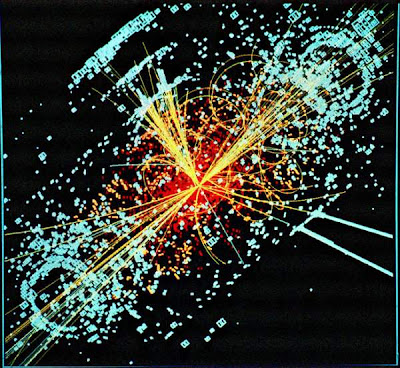 The Large Hadron Collider has just been switched on! And apparently, according to tweets by the wife of one of the scientists, the first beam has already been around the the accelerator three times! Don't think they've actually smashed any atoms yet, so no sign of the Higgs Boson for a while yet.

Here's a game to play that explains some of the science.

And there's even an LHC rap!

On the news over here they've been going on about how many scientist are saying that this thing could theoretically implode the earth. WTH?

I have so many mixed feelings about this kind of thing. On the one hand it's totally fascinating. I mean we are totally hard wired as humans to explore and find the answers to all our questions.

But on the other hand, I'm sure one day we will totally destroy ourselves doing this kind of thing.

Well, apparently, the type of collisions that will occur in the LHC actually happen naturally in the earth's upper atmosphere all the time due to the impact of cosmic rays. And we're still here! LOL

And the last time they built a machine like this at CERN, it led to the invention of the Internet, so who knows what kinds of beneficial spin offs will come to us through this science. The special cooling systems are already earmarked for use in the research into creating usable power by atomic fusion... which could make a big dent in the progress of global warming and benefit millions and millions and millions of people.