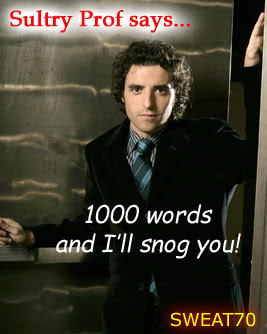 The Prof is trying a different tactic with me, as opposed to the threats I endure from Mr Blue and Kuffer! Will it work? We'll see...

Yesterday was tough going. As usual, I got sidetracked by something, as I mostly do and didn't do any writing during the actual day time... I spent most of my time trying to find out about standard book sizes, as it now looks like my Black Lace novels will be published in a trade paperback size from next April onwards. Gothic Heat will be the first one in this new format, so watch this space for the slightly revised cover. Quite similar to the first version, only my name is freaking enormous!

Any road up, tortured by guilt I was driven to start writing in the evening, and actually managed a fairly presentable 1.1K. As usual the value of said words remains debatable, but at least it's something to edit. I do often wonder if I should try and get more action into my writing [no, not that kind of action...]. A lot of writers have their characters racing around fighting villains or supernatural beings or going to places and generally being energetic, whereas most of my writing seems to feature just two people sitting in a smallish room playing games of psychological and erotic oneupmanship with each other... and as often as not, it's not even actual shagging! I suppose this is because I'm sadly depleted in the plotting gene...

So, what's your preference... Loads of fights and actions scenes and derring do? Or enigmatic smiles and staring each other out while the inner arousal level climbs to critical mass?

--
Telly: not yet
Choc/Yummy: not yet
Mood: okay
Writing: not yet
Reading: Along for the Ride - Michelle Pillow
RSI/FMS: bit sore, tired


Don't forget Portia's Promos - new stuff being added all the time!
Posted by Portia Da Costa at 9:20 am

Email ThisBlogThis!Share to TwitterShare to FacebookShare to Pinterest
Labels: Black Lace, In Too Deep, Seventy Days of Sweat, thoughts of Professor Hottie, writing

Hi, Portia! Sounds like you're doing well! I'm a night owl, so I do my writing late at night, and that works well for me because no matter how wild the rest of my day is, I get some verbiage in -- how much verbiage I get in depends on how well the story is flowing, how much I need to tinker with the storyline, how energetic I'm feeling, etc.

I'm writing a mystery/suspense novel right now, and there's not much derring do yet, but there have been quite a few strange things happen, and they're getting stranger all the time, LOL. :-D

I think it all depends on the writer. We all have our strengths. You do what you do so well (I don't think it's a secret that I love your stuff0. And other people do the action and adventure really well. I don't prefer one over the other. I love them both.
At the moment, I'm trying to learn how to do one of them well. That would be amaziong to me:)

I like a good balance both. Give me action and give me dialogue and I'm a happy camper.

Neither bribes nor threats work with me. I find what routine works for me and stick with it as much as possible.

If it doesn't work I do what I can with what I've got. *shrugs* To each his/her own.