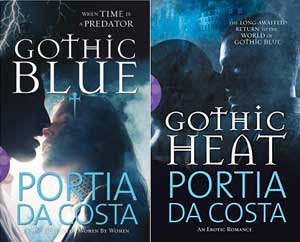 ... an alternate universe this week. The world of GOTHIC BLUE/GOTHIC HEAT, where I've been tweaking and polishing the latter ready to submit it to my agent and thence to my editor. I've finally begun to like GOTHIC HEAT, and I think it's got plenty going for it, but when you're dealing with factors other than just a sexual relationship, continuity, consistency and internal logic become big issues. Even though it's a pretty fanciful tale, it still has to make sense in its own way. And be consistent with stuff that happened and things that were said in GOTHIC BLUE... which is a very tricky balancing act. I think I've got most things now, apart from one 'internal logic' tweakette that remains, but I'm going to do another pass at the thing, just to check that in correcting and expanding on some stuff, I haven't inadvertently created other snafus.

Ack, what writers of 'real' books have to contend with... I've got away without a lot of this over the years because most of my books are just 'some people bonking and perving' without benefit of much in the way of plot. But I think working on GH has been an excellent learning experience and hopefully, pushed my writing skillset just a little further... :)

Forgot to mention... go to Lustbites today if you're interested in GOTHIC HEAT. There's a work in progress post, with a smidgeonette from the book, along with an excerpt from Janine Ashbless's fantastic THE HOUSE OF DUST!

Works in progress from Janine and Portia!

I may be back later to post a bit about my current reprint release, HOTBED, which also has what passes for a rudimentary plot, surprisingly enough.


Don't forget Portia's Promos - new stuff being added all the time!
Posted by Portia Da Costa at 11:01 am