eyeliner skills and other stuff 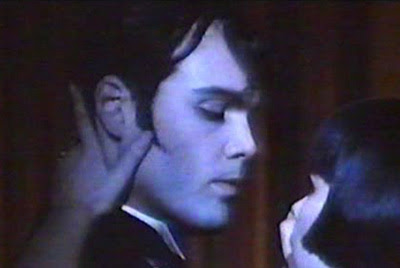 Courtesy of the marvellous Eliza, here's a slightly more understated makeup treatment for the Divine Vincenzo! There's a poll over at Lustbites about men and eyeliner, and as dear Vin is on the list, I would imagine there are folks thinking 'Well, I've never seen him wearing full slap in Law and Order Criminat Intent!'... The piccie above is of him playing Cholo, the terpsichorially gifted knife assassin in the movie Naked Tango. The film is pretty rubbish, but Vin is glorious... Can I mention fedoras, sideburns, spats... and of course those smudged and sultry 'smoky eyes'?

All this mucking about with pix of Vin in makeup is, sadly, about the most creative thing I've done today. I woke up in the early hours brooding and fretting over Gothic Heat. Again! The way it works is that I usually feel okay about it when I'm writing it, but when I'm not writing it, I realise how much, at this stage, is totally wrong with it. There are plot elements that I should be expressing, but am completely forgetting to define... It's sort of slow, and a bit muddled, and probably doesn't seem very much like a paranormal erotic romance... it's more like a rather angsty three way relationship tangle type book... I need to think timescale, paranormal plot elements, key characters that need to appear sooner rather than later, central relationship, hero motivations... I've got bits of stuff about all those in, but they really need to be more concrete and far more consistent.

I'll get there, eventually, and hopefully on deadline... but really, this must be the toughest book I've ever written!
--
Telly: British Superbikes
Choc/Yummy: various choc
Mood: troubled
Writing: about 100 words Gothic Heat
Reading: nothing much
RSI/FMS: bit sore