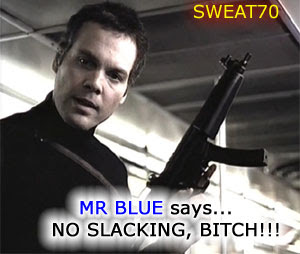 Am pleased to say that I've been doing better at Sweat70 in the last few days! And thank heavens for that... I was feeling very displeased with myself, and Mr Blue was ready to come after me and pistol whip me into picking up speed again. As it is, he's still got his beady eye on my progress and is determined not to let me slack again...

I now have a mere 13.5K approx of Gothic Heat to do... which is a good thing, as there's already a blurb up at Amazon.co.uk. Too late to change the storyline now, as info has obviously gone out now. Have a naughty scene with Rafe and Paula to do, then another confrontation with the baddy, Isidora, and after that, good sorceress Michiko has to do some sexual horse trading in order to get resources the [sort of] team need to resolve Paula's big, big problem. Then it's into the closing stages and a bit of mad magic that I have to sort of make up in order to resolve things and get everybody to where they need to be at the end of a paranormal erotic romance, including the 'extra' people who seem to have put in an appearance during the course of the book! I've a feeling all this crap will run to over 13.5K, but if I run long I'll just have to compensate by tightening the thing up stringently in the editing.