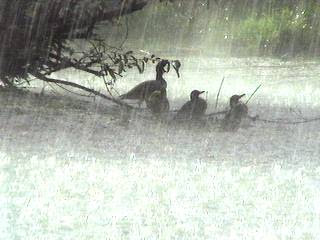 Here in the monsoon region of West Yorkshire, even the ducks are sheltering. Okay, the ducks above aren't actually from WY, but you know what I mean. It has been pouring down for two or three days now, just bucketing it down hour after hour. Himself says the service pit in our garage is now a rather small indoor swimming pool...

The perpetual rain [as Withnail would say] has kept me indoors, which isn't unusual for me, but I did manage to venture out for a short while today, to go to the Post Office and finally send off some parcels of books to various folk. Some very patient prizewinners have been waiting far too long for draw prizes from me, but now I can safely say that everything that should have been sent has now been sent.

Although I'm feeling reasonably okay about Gothic Heat at the moment, I haven't been working on it today. Instead, I've been grappling with a short that an editor has expressed interest in, but would like to be a bit longer. It was 5K but needed to be 7K... Yikes, you might be saying! But actually, it wasn't too difficult... my crit partner shrewdly pinpointed a couple of areas where additional sensuality could fairly smoothly be inserted, and I managed to do the same during the course of the afternoon. Now the thing is an almighty shagathon, with tons and tons of rumpety pumpety with a certain hunky Doctor Nathaniel Gowen!

Hope you didn't get flooded, Wendy.