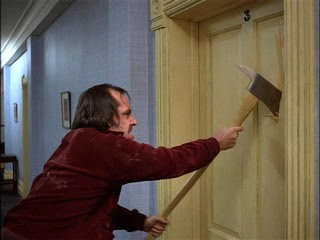 ... attempting to get past the barrier of 'where I'd got to' in Gothic Heat! And the good news is that I've finally moved on... Glory Halleluia!!!!

I've been at a point where unconventional and slightly dubious hypnotherapist Rafe is about to put Paula 'under' for about a fortnight now, and I must have been back over the text I've got so far about three or four times. Mainly because I didn't think Paula's voice was right. I don't think it's perfect, yet, by any means, but she's starting to sound more like a real person. I think I've been resisting moving on, because I have to do some important plot bits soon, and as I haven't really much of an earthly of what's actually happening in this dire saga, I've been a bit scared of that... But I've really got to push on, 'cos I can't keep mucking about much longer!

I also stall when I have big plot decisions hanging around! I revise, revise, revise until I have the direction straight in my head.

LOL Great pic! I know that feeling, well done you on breaking down that barrier ;)