plucky British grit and all that...

Yes, I have been working... I managed to do some stuff, even though I didn't actually get dressed today... shock horror! I working the bedroom anyway, but usually I get up and bathe and do my exercise and occasionally go out in the garden or take a walk and all that... Today however, I just lay around a bit, then sat up and started to work. You'll be pleased to know that I'm bathed and in clean clothes now... but it's taken me until tea time to get that way!

And what have I been working on? Gothic Heat, you ask? Nope, haven't done anything on that mutha for a week now, although I do feel that I still actually 'like' it and will be happy to return to it. No, I've been polishing another project/WIP that I originally worked on many, many months ago. It's part of a joint project with another author, and as there's been a slight development on that front [nothing radical, don't get excited!] it was time to dig it out and review it. I was pretty pleased with it at the time, in my own doubtful way, but looking at it after all this time, it was easy to pick out areas for refinement and improvement. I think a gap like this is often very useful, as you can look at a piece with fresh eyes and a different perspective. 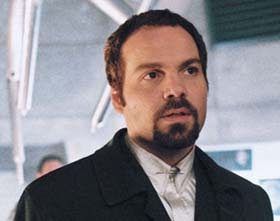 Anyway, the hero if this novella is called Red, and he has a beard! Actually he wears glasses too, but I couldn't find a piccie of the divine Vincenzo with both glasses and beard. If anyone happens to have one tucked away on their hard drive, or knows where there is one to be found, do, do, do let me know!!!

On Friday I will be a guest blogger at the fabulous ROMANCE: BY THE BLOG... and I'll be posting on the topic of MY LEADING MEN. You don't need a thousand guesses to work out that the above mentioned gentleman will be featuring on that roster, do you?