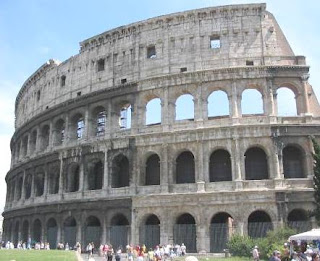 I've spent most of the Bank Holiday in Rome! Well, watching programmes about Ancient Rome on UK History... All very fascinating stuff, historical, yet dramatic... makes me feel good about being 'educated' and less bad about goggling at the telly instead of actually getting on with writing. Have learnt lots of facts about various Emperors and especially enjoyed Michael Sheen's deliciously camp performance as the deranged Nero...

In other news, I'm actually reading one of my own books at the moment!!! Yes, I've given in and have started reading Gothic Blue, in order to not completely **** up the continuity and consistency in Gothic Heat. It's a strange experience, because it's over 12 years since I wrote this thing, and it's like reading something somebody else wrote...

I've only read a bit so far, but I sort of like it. My style was different back then... more flowery and naive... but also fresh and enthusiastic. I'm hoping I've gained more than I've lost over the years, but it's hard to tell. I'm always slightly unnerved when people praise my early work... I love it that they like it, but I worry that I might never write as well again. I suppose all authors have these feelings though...

Actual writing has been going reasonably okay, and have been managing to keep up my 1K per day over the last two or three days. I've now done over 21K, which is around 30% of the book. It still feels as if I've only just started, but I remember a similar state of affairs when I was writing Suite Seventeen... so I'm not *too* worried.

Lots of 'stuff' ahead in the week ahead... I'm posting at Lustbites on Friday with an excerpt from Suite Seventeen, and I might also post a bit at Portia's Prose too. Although don't worry, there's plenty of book left to read for those who are planning to buy! ;)

ps. I might also be holding a minor chat session soon too... at the Romance Galleria. Watch this space for more on that...

Interesting that your style has changed over the years and you hope you've improved, but worry that your earlier stuff was possibly better; as an artist I feel exactly the same way!

It's amazing when we got back and read over stuff we've written earlier, isn't it? Well I love GOTHIC BLUE and I'm looking forward to GOTHIC HEAT now, too! :)