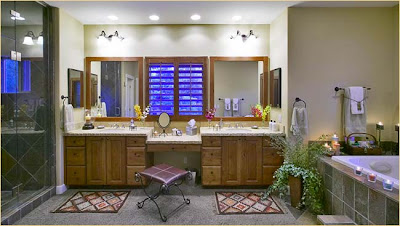 I still don't feel as if I quite know what's going on in Gothic Heat... but I just spent some time mulling over various plot points whilst I was getting washed and dressed in the bathroom, and I think I've had one or two tiny insights into what makes my hero, Rafe, tick. I often have good ideas for writing whilst I'm in the bathroom and above is a picture of this haven of inspiration... Not! Wish my bathroom was as luxurious as the one above. 'Cos if it was, I'd linger for hours in there bathing and beautifying [well, as much as is possible these days...] and probably produce much more and much better in the way of fine fiction!

The problem with Rafe is that for the plot he needs to be more ambiguous, perhaps something of a bad boy... a bit ruthless and dark. But because I like my characters to be basically good, I keep on making him too nice! I've been thinking about what might have happened in his past to make him the way he is... and my bathroom ponderings produced one or two minor traumatic events for him, and also a clearer picture of some past misdemeanors that have led him to the place in his life when he encounters Paula. I foresee a long soak in the tub later in the day, in order to flesh out a better back story for her too! At the moment, they're both too vague... I need to actually sit down and write character bios for them, as well as tidy up the sort of outline thing I've written... in fact I need to actually do the normal prep a sane writer would do for any book! Rather than charge into writing willy nilly with no idea in my head what I'm supposed to be writing!!!

But that's one of my problems really... I panic if I'm not actually writing wordcount, and subconsciously think of prep as avoidance of the real issue of banging down the story... Which makes me think, I'm not actually the full on pantser I thought I was becoming... I'm still actually a planner at heart, and avoiding the planning is having a detrimental effect. I need to stop panicking about deadlines [I've got until October, after all...] and think things through a bit...

Writers... do you ever panic like this? Ever rush too quickly into the actual writing because you fear that you're deliberately avoiding writing by taking time to plan? I'd love to know if people have the same angsts and worries that I do...


Don't forget Portia's Promos - new stuff being added all the time!
Posted by Portia Da Costa at 9:21 am

I panic all the time :) I always have an outline when I start, but then I'll get started and realise there's a big jump in the plan and I don't know how it works, eeek.

I agree, that's some bathroom!

I plan a little and then just write. I may not like it. I may think its bad, but I figure I can always come back to it afterwards and change it.

If there aren't any words on the page, then there's nothing to tinker with and that makes me panic more than anything.

He he he. It's one long drawn out panic... I always end up with about fifteen different plans, none of which I actually use.

What a relief to hear that other writers panic!

It must be a hazard of the profession... I wonder what it's like to be one of those smug bitches out there who think they're wonderful?